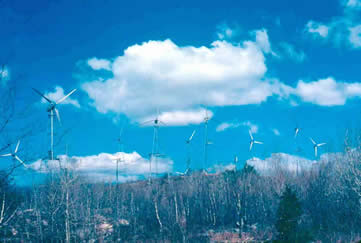 A number of early graduates of the UMass program founded the first modern wind turbine manufacturing company in the United States in 1979, US Windpower in Burlington, MA.

In December 1980, US Windpower installed the world’s first wind farm, consisting of 20 wind turbines rated at 30 kilowatts each, on the shoulder of Crotched Mountain in southern New Hampshire. These turbines were direct descendants of the UMass WF1.

US Windpower, which later changed its name to Kenetech, subsequently developed wind farms in California. After experiencing machine failure there too, Kenetech improved its designs and became the world’s largest turbine manufacturer and wind farm developer before succumbing to the weight of aggressive development efforts, serious technical problems with its newest turbines, and a weak US market, ultimately filing for bankruptcy in 1996. Many of the company’s assets (including its wind turbine designs) were acquired by Enron Wind, which later became GE Wind.