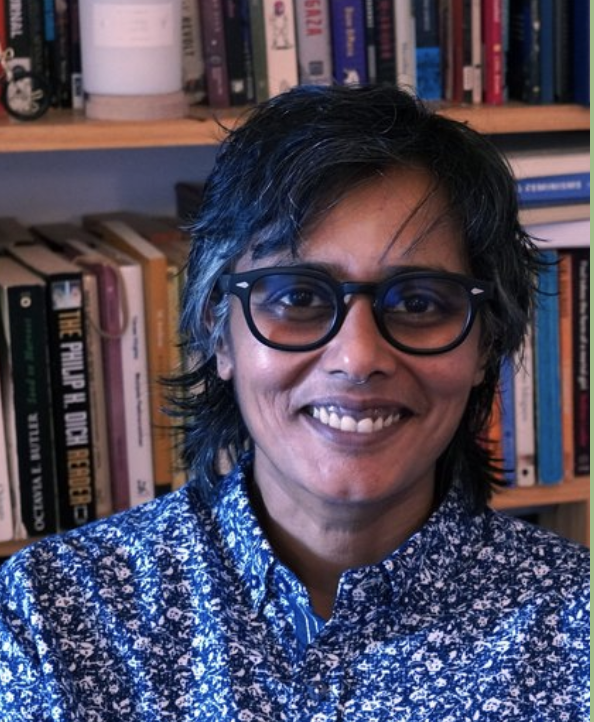 Dr. Svati Shah is a feminist anthropologist who works on questions of sexuality, gender, migration and caste capitalism in India. They hold adjunct appointments in the Departments of Anthropology and Afro-American Studies, and are affiliated with the Asian American Studies Program and in the Social Thought and Political Economy Program (STPEC) at UMass. Dr. Shah earned their doctorate in Columbia University’s joint program in Anthropology and Public Health and, previously, a Master’s in Public Health degree from Emory University. They are an undergraduate alum of the University of North Carolina-Chapel Hill’s Department of Anthropology.

Dr. Shah’s first ethnographic monograph, Street Corner Secrets: Sex, Work and Migration in the City of Mumbai, was published in 2014 by Duke University Press and by Orient Blackswan in India. It discussed sex work as an aspect of labor migration that is mediated by the politics of space, urbanization and caste. Drawing on a decade of ethnographic and archival research, the book showed that sex work is part of a range of economic strategies for survival among informal sector workers in Mumbai. Dr. Shah’s work has also appeared in a number of recent anthologies, including Paradoxes of Neoliberalism (Routledge 2021), Women in the Worlds of Labour (Orient Blackswan 2021), and Gender, Caste and the Imagination of Equality (Women Unlimited 2018), and in earlier collections, including Poverty, Gender and Migration (Sage 2006) and Non-Governmental Politics (Zone Books 2007). They have published peer-reviewed articles in a range of scholarly journals, including Antipode, the Economic and Political Weekly, New Left Review, Interventions, Cultural Dynamics, and South Atlantic Quarterly, and in blogs and magazines, including Himal Magazine, The Caravan, Seminar, Anthropology News, the Huffington Post, and Open Democracy. They have served as a guest editor for special issues of SAMAJ: South Asia Multidisciplinary Academic Journal and the Anti-Trafficking Review.

Dr. Shah is currently working on a book that is based on long term ethnographic research on the shifting political landscapes of queer and transgender social movements in India. The book, Dissent in Queer Times: Sexuality Politics and India’s Second (Undeclared) Emergency, offers genealogy of LGBTQI+ spaces that emerged from the autonomous feminist groups and the civil liberties and democratic rights organizations that initially formed in response to the declared (first) Indian Emergency of 1975-77. The book engages with the rise of authoritarianism and the histories of left social movements, queer feminist critique, and anthropology in South Asia.

Dr. Shah’s external affiliations include serving as a Research Associate in the Wits Institute for Social and Economic Research (WiSER) at the University of Witwatersrand in Johannesburg, South Africa and being a member of the South South Forum at Dartmouth College, and of the Global Research Programme on Inequality (GRIP) at the University of Bergen, Norway. Their research has been supported by the American Institute of Indian Studies, the Fulbright Foundation, and the University of Massachusetts, Amherst.

“Sex Work, Sex for Work, and the Spaces Between,” in Women in the Worlds of Labour: Interdisciplinary and Intersectional Perspectives. Edited by Mary John and Meena Gopal, New Delhi: Orient Blackswan, 2020.

“Materialising Sexuality, Poverty and the Law” in Gender, Sexuality and Social Justice: What’s Law Got to Do with It? Edited by Kay Lalor, Elizabeth Mills, Arturo Sánchez García, and Polly Haste. Brighton: Institute of Development Studies. Pp. 72-73. 2016.

“Queering Critiques of Neoliberalism in India: Urbanism and Inequality in the Era of Transnational “LGBTQ” Rights.” Antipode: A Radical Journal of Geography, 47(3): 635-651. 2015.

“Sexuality and ‘The Left’: Thoughts on Intersections and Visceral Others.” The Scholar and Feminist Online, 7(3): Summer. 2009.
http://sfonline.barnard.edu/sexecon/shah_01.htm.