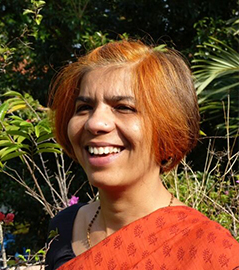 Professor Asher is a biologist-turned-social scientist with three decades of field-based research on biodiversity conservation, international development, and struggles for social change in Latin America and South Asia. Asher’s research interrogates the gendered and racialized dimensions of social and environmental change in the global south as well as the meanings and practices of feminist “field work.” Her publications include a monograph, Black and Green: Afro-Colombians, Development, and Nature in the Pacific Lowlands (Duke University Press, 2009), where she foregrounds the complex and contradictory ways Afro-Colombian movements engage with the state, NGOs, and international discourses of development and environmentalism after a constitutional change recognized collective land rights for black communities in Colombia. Besides her monograph, her scholarly work appears in Antipode, Catalyst: Feminism, Theory, Technoscience, Feminist Studies, Feminist Review, GeoForum, Hypatia, and elsewhere. She is currently working on a book entitled Fieldwork: Nature, Culture, and Gender in the Age of Climate Change, which foregrounds the complex and contradictory intertwining of natural-cultural worlds, and the challenges these pose for 21st-century struggles for environmental and social justice.

Asher received a Bachelor of Science in Life Sciences from St. Xavier College, Mumbai, a Master of Environmental Management from the School of Forestry & Environmental Studies at Duke University, and a Ph.D. in Comparative Politics from the University of Florida.  She regularly offers seminars on feminist theory, Marxist thought, and environmental justice, and she takes part in several environmental research initiatives involving the humanities and social sciences across the Five Colleges. From 2002 to 2013, she was Associate Professor of International Development and Social Change at Clark University. From 2013 to 2015, she worked as a Senior Scientist in the Forests and Livelihoods Program at the Center for International Forestry Research (CIFOR), in Bogor, Indonesia.

•    “Rethinking decolonial and postcolonial knowledges beyond regions to imagine transnational solidarity” in Hypatia: A Journal of Feminist Philosophy, forthcoming (with P. Ramamurthy).
•    “Fragmented Forests, Fractured Lives: Ethno-territorial Struggles and Development in the Pacific Lowlands of Colombia” in Antipode, 2019.
•    “After Post-Development: On Capitalism, Difference, and Representation.” Antipode 51(1): 25-44  (with J. Wainwright)
•    “Spivak and Rivera Cusicanqui on the Dilemmas of Representation in Postcolonial and Decolonial Feminisms.” Feminist Studies 43 (3): 512-524.