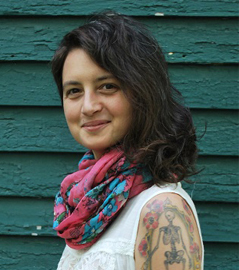 Angie Willey is Five College Associate Professor of Feminist Science Studies, Graduate Program Director for Women, Gender, Sexuality Studies, and Director of the Five College Women’s Studies Research Center. She received her B.A. in Women’s Studies from Fordham University, her MSc in Gender Studies from the London School of Economics, and her Ph.D. in Women’s Studies from Emory University. Utilizing her expertise in queer feminist theory, settler colonial and postcolonial studies, and the history of gender, sexuality, and race in the biosciences, Willey’s research addresses the naturalization of forms of social belonging that undergird the privatization of wealth and care and on the conditions of possibility for the emergence and sustainability of other ways of knowing and forms of relationality.

An intervention in the study of monogamy, pair bonding, and polyamory, Willey’s first book Undoing Monogamy: The Politics of Science and the Possibilities of Biology (Duke University Press, 2016), offers a radically interdisciplinary exploration of the concept of monogamy in U.S. science and culture. Refusing to answer the naturalization of monogamy with a naturalization of nonmonogamy, the book demands a critical reorientation toward the monogamy question in the natural sciences, social sciences, and humanities and challenges our investments in coupling and in disciplinary approaches to biological bodies. Willey is also co-editor of Queer Feminist Science Studies (University of Washington Press, 2017), a cutting-edge reader and pedagogical resource that takes Feminist Science Studies into new and exciting terrain by tracking a genealogy for science studies through queer feminist theory. Her new book project, Queer Feminist Materialisms, examines the materialist turn in feminist theory from a critical science studies perspective. By exploring plural and unexpected genealogies of queer feminist materialisms, the project foregrounds the stakes of the materiality of embodiment while challenging the idea that scientific disciplinary ways of knowing offer less mediated access to that materiality than humanistic ones. By re-centering critical studies of race, sexuality, and power, she aims to theorize critical materialist methodologies that help undo logics of racial capitalism.

Willey’s work has also appeared in Feminist Formations, Signs: Journal of Women in Culture and Society, Feminist Studies, Science, Technology, & Human Values, The Archives of Sexual Behavior, and Sexualities ad in edited collections on the global history of sexual science, the biology of difference, monogamy, and new materialism. She has co-edited special issues of Imaginations: Journal of Cross-Culture Image Studies (with Kimberly Tallbear) on “Critical Relationality: Queer and Indigenous Belonging Beyond Settler Sex and Nature,” the Journal of Lesbian Studies (with Jennifer Terry) on “Biology/Embodiment/Desire,” and Catalyst: Feminism, Theory, Technoscience (with Banu Subramaniam) on “Science out of Feminist Theory.”

Undoing Monogamy: The Politics of Science and the Possibilities of Biology, Duke University Press, 2016.

With Jane Couperus, Jennifer Hamilton, and Banu Subramaniam, “The Mating Life of Geeks: Love, Neuroscience, and the New Autistic Subject,” in Signs: Journal of Women in Culture and Society, forthcoming, Winter 2015.