A Panel with Red Canary Song 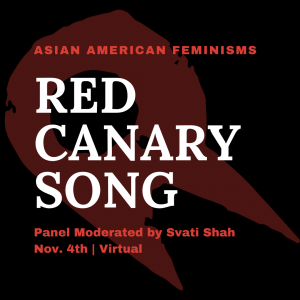 A grassroots collective of Asian Pacific Islander American (APIA) and

In the wake of the killing of eight people in massage spas in the Atlanta area March 2021, Red Canary Song, has been one of the most prominent voices and effective organizers in mobilizing responses to and understandings of the conditions of violence that culminated in but were not limited to this mass shooting.  RCS is providing paid residencies, resources, medical care, and mutual aid to workers based in NYC. RCS builds coalitions transnationally, focusing on other BIPOC sex work, massage, and social justice movements. RCS members bring unique, multi-faceted, and comprehensive perspectives on Asian sex work activism, and their work has been featured in articles such as “Migrant Massage Workers Don’t Need to Be Rescued” (The Nation) and “Saying Never Again to the Violence in Atlanta Means Saying No to More Policing” (New Republic).