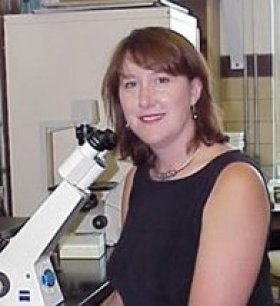 In the past few years we have focused on the role of Notch receptor proteins during normal and abnormal development. The Notch family of proteins is comprised of four extracellular membrane-associated receptors (Notch 1-4) whose structure and function have been highly conserved throughout evolution. Signaling through these receptors is initiated by ligand on adjacent cells, which results in activation through proteolytic cleavage events at the membrane. The cytoplasmic domain is released and translocates to the nucleus where it participates in numerous protein:protein interactions which affect transcription.

Transgenic studies have indicated that deregulated expression of the Notch4 receptor results in a retarded growth of the epithelial cell compartment of the mammary gland and a block in lobulo-alveolar development. Furthermore, these mice develop breast tumors within three to six months. My lab has been studying signaling pathways induced by Notch receptors and how these pathways interact with a number of other signaling pathways involved in mammary gland development. I am particularly interested in the interplay between Notch signaling and steroid receptor transactivation, p53 activation, and activation of epidermal growth factor receptor family members. Activation of Notch receptors in one cell also appears to initiate an interesting set of communicative events with neighboring cells. Secretion of various factors and changes in cell surface receptors appear to modulate the normal responses in other cellular compartments and affect immune surveillance in co-culture assays. These events may be as important as the internal signaling pathways in the turn towards malignant growth.