Professor of Environmental Toxicology and Chemistry 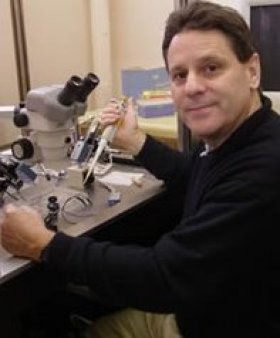 Extent, detection and management of the human head louse, Pediculus capitis, resistant to pediculicides. An automated artificial membrane/blood feeding system allows the maintenance of human head louse populations without human or animal hosts. We currently are carrying out the first population genetic analysis of resistance in head lice and basic biochemistry and molecular analysis of the mechanisms of resistance (see figure below). We have identified both oxidative, hydrolytic and target site insensitivity (knockdown resistance, kdr) resistance mechanisms and are developing DNA-based diagnostics for their detection for resistance management.

Age-grading Aedes aegypti, the vector of dengue virus. In collaboration with Drs. T. Scott and J. Edman (UC-Davis), we have begun the study of the aging process of adult female mosquitoes that vector dengue virus and in particular how the vector capacity of the female changes over time. To date, we have developed an age-grading model based on cuticular hydrocarbons that ages Aegypti females to 15 days or older with 70% accuracy. Although this method is a significant step forward, we have begun to examine additional biochemical and molecular processes implicated in the aging process, including various proteomic approaches.

Action of pyrethroids on voltage-sensitive calcium channels from rat brain. CS-syndrome pyrethroid insecticides evoke a massive release of neurotransmitter during intoxication. A synaptosomal preparation from presynaptic nerve terminals allows the monitoring of neurotransmitter release, calcium uptake and membrane depolarization, simultaneously, and the examination of the agonistic/antagonistic aspects of mixtures of similarly acting pesticides. CS-syndrome pyrethroids have been determined to be potent and stereospecific agonists of N-type calcium channels, an action that is consistent with the choreoathetosis writhing syndrome of poisoning.

Minimizing recreational exposures to turf pesticides. The potential for significant exposure to pesticides via turf is enormous if one considers the amount of pesticide used and the area treated when including lawns, golf courses, parks, athletic fields, etc. We have detailed these exposure situations via dislodgeable foliar residues as estimates for dermal exposure and volatile residues as estimates for inhalation exposure to design mitigation strategies. Recently, we have begun extensive dosimetry and biomonitoring studies to determine actual human exposure levels during a round of golf. This information will be critical in the evaluations of the actual "risk cup" input associated with turf pesticides.

Developmental effects of contaminants on salinity preference and seawater survival of Atlantic salmon: Integrating physiology and behavior. In collaboration with the Department of Natural Resource Conservation (UMASS-Amherst) and the US Fisheries and Wildlife Department, we are assessing the estrogenic effects of nonylphenol and PCBs, which are common contaminants in rivers due to sewage treatment plants, industrial sites and storage sites, on the osmoregulatory response during parr-smolt transformation of Atlantic salmon. We will carry out a tissue-specific analysis of these compounds to see if levels in the hypothalamus and thyroid correlate to specific hormonally controlled behaviors and changes in specific enzyme levels of these tissues.