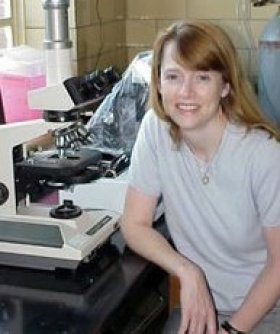 All of the cells of the blood descend from the progeny of hematopoietic stem cells resident in the bone marrow. Hematopoietic stem cells are very long-lived: they survive and divide for the life of the organism. Their daughter cells go through a period of development in which they become more and more specialized, turning on and off the expression of specific genes, until they are fully differentiated. The subversion of this process of normal development often results in cancer. My laboratory is interested in how the regulation of gene expression by the RUNX family of transcription factors influences the development and cancerous transformation of cells of the immune system.

RUNX family transcription factors (RUNX1, RUNX2, and RUNX3) bind to DNA and other proteins to activate or suppress transcription of specific genes. We have previously found that expression of RUNX1 has profound effects on the development of T cells and the myeloid cells known as neutrophils. We use a retroviral expression system that allows us to express normal and mutated RUNX proteins in both primary cells and cell lines, which can then be cultured. The projects currently pursued by my laboratory include: