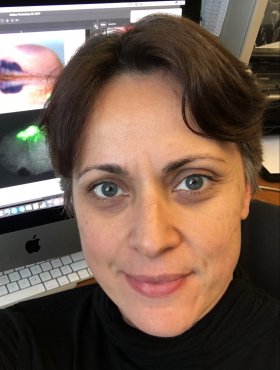 The cranium of vertebrates has undergone a drastic diversification to provide these animals a competitive edge regarding food acquisition in a particular niche. For example, the jaw and nasal region of some birds forms the beak capable of breaking hardest seeds (Toucan and parrots) while the beak of others have adapted to be able to reach down the long nectar tubes of flowers (humming birds). In all vertebrates, the craniofacial development starts with the Cranial Neural Crest (CNC). During development, the cranial neural crest (CNC) originally arises from the dorsal part of the future brain, emigrates ventrally and differentiates into many of the structures of the head including the craniofacial cartilages bones and cranial nerves. The CNC is one of the most plastic cell populations in the animal kingdom. This plasticity is evident in the wide variety of craniofacial features among vertebrates as well as in the differences in the facial structures between the members of a given species. However, CNC plasticity is a double-edged sword as evidenced by the predominance of craniofacial defect and disease at birth. The most widely known craniofacial defect is the cleft palate. Some of these diseases have been linked to defects in CNC migration, survival or differentiation. However, the underlying cause of these defects is unknown for the vast majority of these diseases. It is interesting to note that some changes in craniofacial morphology such as micrognathia (small jaw) can be considered a disease state in some species (i.e. human) while considered an adaptation in others (i.e. Labeotropheus fuelleborni, a lake Malawi cichild that acquire its food by grazing what is growing at the bottom of the lake). A long-standing research interest of mine has been the study of the molecular mechanisms underlying craniofacial development in general and the migration of the neural crest in particular. My approach is to investigate the function of genes whose expression or coding sequence has been modified between closely related species with different craniofacial features such as the Lake Malawi cichlid fishes Melandia zebra and Labeotropheus fuelleborni. My long-term goal is to investigate the molecular mechanism underlying the evolution and the abnormal craniofacial development of vertebrates using the anuran frog Xenopus laevis as a model system.

Xenopus laevis is one of the best model systems to study CNC migration and the early events leading to craniofacial development. Embryos can be obtained all-year round and are amenable to microinjection including targeted injection that minimizes the pleiotropic effect of injected compounds. These targeted injections also allow the quick scoring of CNC migration status in a large number of embryos when a fluorescent lineage tracer is co-injected (Figure 1). Microsurgeries are readily done (Figure 1) and the presence of yolk in all embryonic cells allow the culture of CNC explants in serum free media for many hours if not days. Knock down using morpholino antisens oligonucleotides is efficient and the emerging CRIPSR-cas9 knock-out are currently being set up in my lab (Figure 1). Multiple Xenopus cell lines are available (XTC, S3 and A6) and can be efficiently transfected. Combined with the ability of the cells to grow at room temperature in a HEPES based media, these cells have proven to be a great tool to analyze the subcellular localization of proteins. Lastly, both embryos and cell lines are amenable to protein work (Immunoprecipitation, western blot, pull-down and mass spectrophotometry). The laboratory of Dr. Albertson at the university of Massachusetts is identifying the genetic causes underlying the differences of jaw length between two Cichlid fish species: L.fuelleborni  (LF) and M. zebra (MZ). The former has a micrognathic jaw while the latter has a longer jaw. Dr. Albertson has identified many coding and non-coding SNP (single nucleotide polymorphism)that are alternatively fixed between the two species. One of the coding SNP changed the amino acid sequence of a poorly characterized protein: Limb Bud and Heart (Lbh). More specifically, the change transforms an arginine in the position 17 into a glutamine. Lbh encode a putative transcriptional co-factor whose function in heart and limb development in the mouse is important but poorly understood. Interestingly, this co-factor is also expressed in the mouse cranial neural crest but no function for craniofacial development has been described so far in that species and very little is know about the general function of the protein at either the cellular or organismal level. In collaboration with Dr. Albertson in the Biology department at the University of Massachusetts in Amherst, we are investigating the role of Lbh during craniofacial development in cichlids and frogs. My lab, which employs mostly undergraduate students, is studying the function of Lbh in Xenopus. We already found that LBH is critical for CNC migration (Powder et al., 2014). Using the power of Xenopus model system, we are currently investigating what cellular and molecular mechanisms are affected by the loss of Lbh and the change in the residue #17 in cichlid fishes.

‹ Previous members of the Alfandari lab up Career Information ›