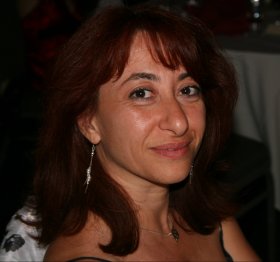 Our research is focused on understanding the cell signaling events conducive to sperm capacitation as well as the mechanism(s) by which the capacitated sperm is then able to induce activation and to trigger development in mammalian eggs, ultimately leading to a successful development of the embryo. As part of this task, we are interested in identifying the molecule(s) involved in these events in male germ cells, among which we count the novel family of testis-specific serine protein kinases (TSSKs). The TSSK protein family belongs to the AMPK kinase branch in the CAMK group, and is composed of six members, TSSK1 through TSSK6; whether TSSK5 has all the domains required to be an active kinase has not yet been determined. Using an array of TSSK specific antibodies, we have investigated the localization of TSSKs in mouse and human sperm and demonstrated that TSSK1, TSSK2, TSSK4 and TSSK6 are present in mature sperm (Li et al., 2011). Our studies have provided further support to previous observations indicating that TSSK family members display a different cellular localization, thus suggesting a non-redundant role for these protein kinases. The restricted expression of TSSKs during differentiation of spermatids in the testis, as well as the importance of phosphorylation in signaling pathways, has led to the prediction that TSSK(s) have an important role(s) in germ cell differentiation and/or sperm function. This prediction has been recently confirmed by the sterile phenotype of the Tssk6 knock-out mice (Spiridonov et al., 2005, Sosnik et al., 2009) and of the double Tssk1 and Tssk2 KO (Xu et al., 2008; Shang et al., 2010). Despite these new discoveries, the specific function and mode of action of TSSKs in male reproduction has yet to be determined.

In order to tackle these questions, our research group has chosen the mouse as an experimental model and is applying several traditional biochemistry and molecular biology techniques. More recently, by using a novel phosphoproteomics approach, and in close collaboration with the Visconti lab, we have pinpointed several proteins that are differentially phosphorylated upon sperm capacitation in mice (Platt et al., 2009). Furthermore, we have developed a method for analyzing sperm proteins by metabolic labeling with Porthophosphate (Salicioni et al., SSR Annual Meeting, 2008). This method should prove very useful for our ongoing studies on the interplay between kinases and phosphatases in the capacitation-associated signaling events.

The characterization of TSSKs and the determination of TSSK inhibitors have the potential to lead to new advancements in male infertility and drug development. Besides our current studies using a mouse model, we are analyzing the role of TSSKs in human sperm physiology, and applying this knowledge to male infertility in humans, in collaboration with the Baystate Medical Center Reproductive Biology Lab.

While the advent of new assisted reproductive technologies, especially intracytoplasmic sperm injection (ICSI), has alleviated the number of cases of untreatable male infertility, the molecular defect(s) that impair sperm function is largely unknown. Thus, our research efforts are directed towards a better understanding of the molecular basis of male infertility and to the identification of molecular defects associated with male infertility that could lead to the development of novel therapeutics. On the other hand, an essential component of preventive health is the ability to control fertility through the use of effective contraception. Identification of germ-specific enzymatic molecules such as the TSSK kinases should prove useful targets for specific inhibition of spermiogenesis that will render the sperm unable to fertilize; specific inhibitors of these enzymes will reversibly block reproduction and therefore constitute ideal candidates for a non-hormonal male contraceptive agent.

‹ Scholarships up Barbara A. Osborne ›