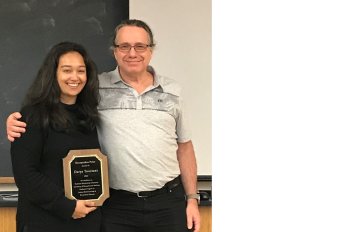 Darya Tourzani, the 2022 recipient of the Snoeyenbos Award, was an undergraduate in the Veterinary and Animal Sciences Department graduating in 2016 with a bachelor’s degree in Animal Science. Darya began her research experience in the lab of Dr. Pablo Visconti in April of 2014 as an upcoming junior undergraduate student. During her undergraduate studies, Darya focused on understanding the mechanisms and characteristics that were involved in mammalian reproduction. During the summer of 2014, she went to Alto Pucara, Peru with Stephen Purdy, DVM, as a part of the Nuñoa Project to work alongside alpaca farmers in order to aid in improving their breeding strategies and herd quality. This experience, along with her initial experience working in the research lab of Dr. Visconti established a passion towards becoming a reproductive scientist and embryologist. Continuing her research interests, Darya entered the Animal Biotechnology and Biomedical Sciences graduate program, maintaining her passion for reproduction in the Visconti lab.

While pursuing her graduate studies, Darya first focused on the initial passage of spermatozoa through the male epididymis where the male gamete acquire their potential to become capable of fertilization. This process known as sperm maturation, allowed her to identify key changes in post-translational modifications required for the sperm to become fully mature. Her current research interests are focusing on the sperm’s contribution to pre-implantation development. Once mature, sperm undergo a series of molecular changes in the female reproductive tract that allow them to fertilize the oocyte. It has been known for many years that, in addition to the contribution of paternal DNA, sperm molecules are necessary to activate the oocyte. However, more recently it has been proposed that the sperm could be influencing the success of pre-implantation development and implantation. In the last few years, the Visconti lab developed a novel treatment known as the SER treatment (Sperm Energy-restriction and Recovery) which increase significantly fertilization and embryo development rates and enhance the fertilization potential of subfertile and sterile mice models. Using the SER treatment, Darya investigated the relationship between sperm’s incubation conditions prior to fertilization and the success of early embryo development. In addition to understanding the significant role the male gamete plays in development, Darya hopes to demonstrate the robust success the SER treatment has in infertile/sub-fertile strains, as well as in animals with significant economic value.

The Snoeyenbos Prize was established in 1994 in honor of Professor Glenn Snoeyenbos who was a faculty member of the Department of Veterinary and Animal Sciences. The Snoeyenbos Prize is awarded annually to honor a current outstanding graduate student based upon the student’s grade point average, research progress, presentations at meetings and faculty recommendations. The recipient is selected by a faculty vote from nominated candidates.