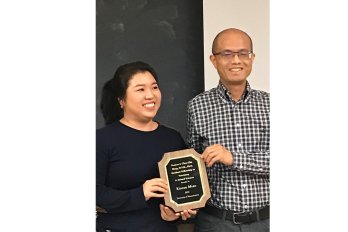 Sue is a Ph.D. student working in Dr. Wei Cui's lab focusing on mammalian oogenesis and early embryo development, by using knockout and conditional knockout mouse models. Thus far, Sue has discovered several key genes, including Rbbp4, Zc3h4, and Polr1d, which are involved in cell lineage specification and blastocyst formation, in collaboration with Mager Lab on the KOMP2 project. In addition, Sue is investigating the effect of biophysical optimization on embryo culture in vitro during the preimplantation stage, in collaboration with Sun Lab. Furthermore, Sue has participated in the project of Berberine alleviating LPS-induced apoptosis and inflammation during mouse preimplantation development. The goal of all these projects is to elucidate the functions of various genes and factors during mammalian embryo development. Currently, Sue is investigating mouse oogenesis by using multiple conditional knockout mouse models. So far, Sue has published 3 first-authored, 2 co-first-authored, and several co-authored papers in peer-reviewed journals.

The Frances and Chou-Chu Hong, DVM, PhD Graduate Fellowship in Veterinary and Animal Sciences was established by two brothers, Jerry C. Hong (’93 Isenberg School of Management), and Jason I. Hong to recognize the education and training at UMass Amherst of their father, Chou-Chu Hong DVM, PhD, who recently stepped down as President of Taiwan’s Level Biotechnology, Inc. Dr. Hong, who earned his PhD at UMass Amherst in veterinary and animal sciences in 1973, has brought international distinction to his alma mater. A former faculty member at Medical University of South Carolina, he was invited by Taiwan’s National Science Council to help establish its Center for Toxicity and Preclinical Sciences and to serve as the director of Taiwan’s National Laboratory Animal Breeding and Research Center. A faculty member of National Taiwan University and the Academia Sinica, he has served as President of the Chinese Society of Laboratory Animal Sciences and a member of Taiwan’s Development Center for Biotechnology.