The next spotlight for The Lily’s Revenge is focused on Christina Beam, the costume designer. This is the third article for this project; for more context on Taylor Mac and The Lily’s Revenge, please refer back to the interviews with director, Jen Onopa, and dramaturg and choreographer, Gaven Trinidad. 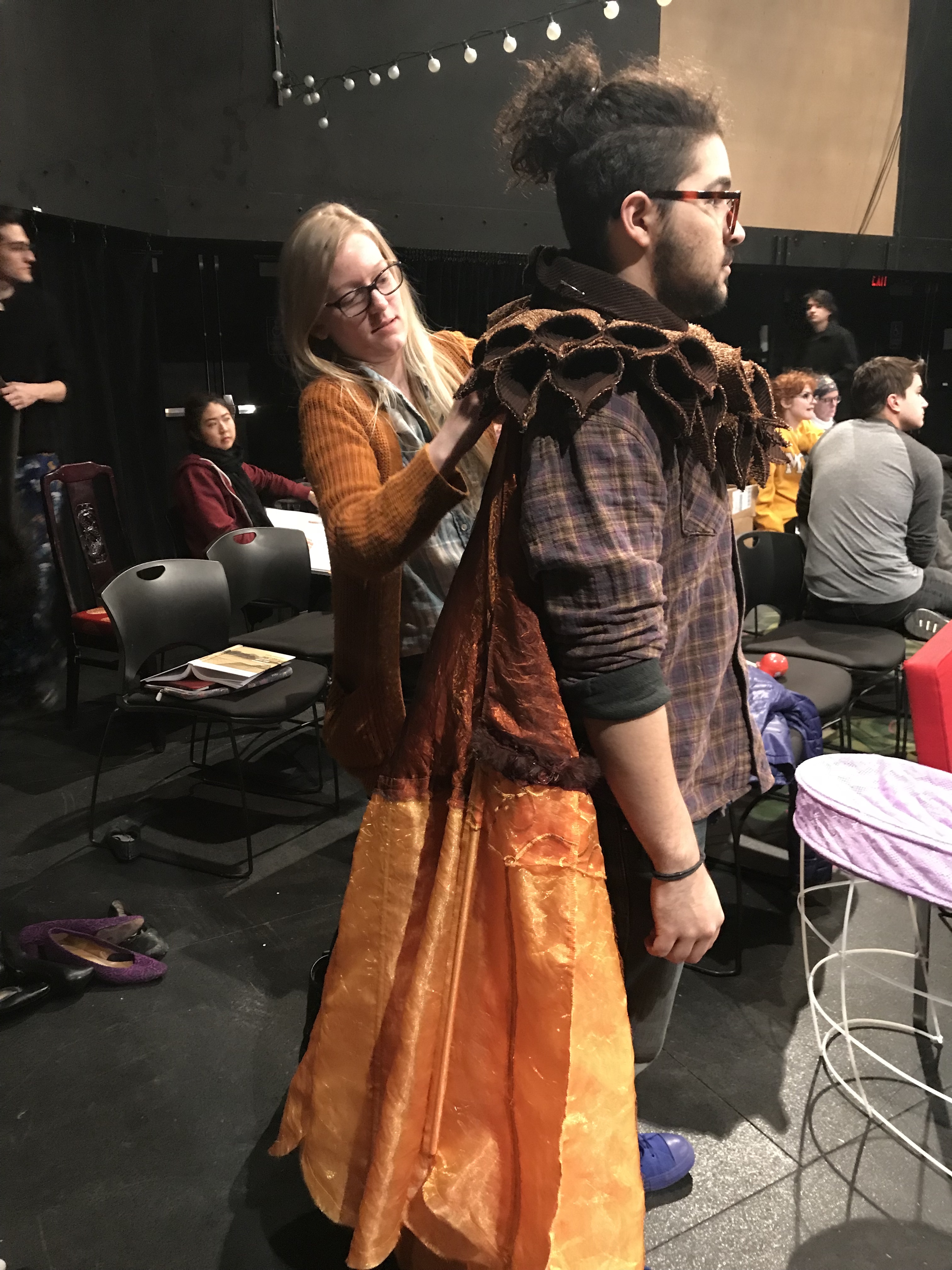 Christina Beam is a third year graduate student focusing on costume design and construction. Costume designing The Lily’s Revenge as well as building some of the costumes for the production will make up her thesis.
Just like the other graduate students collaborating on this production, Christina recognizes the “technical challenge that this show poses.” However, she said that she is excited to tackle “the engineering and planning involved in the actual construction of the costumes.” The Lily’s Revenge “is a huge build show, which I haven’t gotten to do yet in my time here,” she adds. Furthermore, with over thirty cast members playing flowers, bridesmaids, and curtains, the sheer number of elaborate costumes that she must design and guide through the shop is more than she has ever done for a single show before.

Some of the costumes for The Lily’s Revenge are coming from the Department’s stock of clothing, and some are being constructed entirely from scratch. Additionally, many of the characters’ costumes include headpieces, which Christina is incredibly excited to start making, as crafting is one of her favorite hobbies.

What is unique about the costumes for this production compared to others that Christina has designed is that some of the costumes will include recycled, nontraditional materials such as forks, coffee filters, sand, and napkins. The reasons for these unconventional material choices are twofold: First, because Christina is designing costumes that resemble flowers, she must recreate the textures of these natural objects. Furthermore, an important staple of queer performance, which is the genre The Lily’s Revenge is situated in, is the aspect of DIY costuming. Christina says, “It’s really about using what you have and building up. It’s scrounging together what you can and making something stunning.” However, Christina wants to make sure she is putting clear intention around the materials she chooses. She really wants to make sure that they “feel appropriate and right to each flower and that they have the looks that they deserve to have.” Christina understands that “dressing these characters, particularly the Garden Flowers, really is an act of resistance. We’re showcasing this community [in which] identity and expression in their appearance, even just in the way they dress, can be an act of resistance. It can be the one thing that they do where they can say, ‘this is who I am’ in a world where people keep trying to label them and tell them, ‘this is who you are and this is who you aren’t.’ So, dressing them is really important. I want to make sure I dress them in a way that is dignified and beautiful.”

Right now in her design process, Christina is focusing most on the blending of creativity in design and the wearability of the costumes. She must create clothing that can withstand a week of technical rehearsals and seven performances while also creating pieces that convey the story. For instance, one of Christina’s original ideas was to use paper to construct Pink Lady Slipper’s costume. However, after watching the actor in one rehearsal, Christina realized that if made of paper, his costume would rip. Therefore, Christina made the decision to switch the material of his costume to Tyvek- a more durable, papery-looking material. Christina says, “[Tyvek] portrays the idea that paper would convey, but is still stage-worthy.”

Christina is most curious about how she will be creating Time’s costume. The show calls for a literal hour-glass silhouette, in which sand trickles through the hourglass throughout the show. Though Christina has planned out how she would ideally like to create this garment, she knows there will be unexpected challenges. Furthermore, with all the fight choreography in the production, she is curious to see how her elaborate flower costumes react to punches, kicks, and hair-pulls. To help make the actors’ transition from their own rehearsal fashion into their flower pots for the show easier, Christina has provided rehearsal shoes, hoop skirts, and headpieces that mimic the silhouettes of the costumes that the costume shop is building. This has allowed actors to understand their range of motion while they are experimenting with movement, so that the costumes become part of the characters rather than a restriction in tech.

Though Christina is not observing every rehearsal, she loves to pop in to watch each actor explore their character. She says that rehearsals are “getting more and more fun the more [the actors] become comfortable on stage. And Jen and Gaven are really forming a sense of community.” Christina has the utmost respect for her fellow graduate students, and she knows that they share that same trust and respect for her. She stated that “I love them as people and I love them as artists.” She fondly recalls working together with Jen, Gaven, and Tamara last year on the Department’s production of The Happiest Song Plays Last and she is so happy that the team is together again to further build their creative and collaborative skills before they graduate.

As I interview each graduate student, the theme of inclusion as an inseparable aspect of queer performance and of this production has been mentioned. Christina said that “[The Lily’s Revenge] is so inclusionary and that’s one of the principles from my research of this theater practice that really draws me. Because we all have our things that we think we have to be and that we have to fit into and we’re told what happiness is and we’re not always allowed to say, ‘well you know I think maybe it’s something else for me.’” To Christina, the Lily’s story truly is an “allegory for anyone who feels like society is telling them their role and how to be happy.” Queer theater, as this group sees and experiences it, frees you from a confined sense of happiness; it’s inclusive of all people. Because each of the graduate students has that mindset at the core of their costume design, direction, dramaturgy, and lighting design, The Lily’s Revenge will evolve into a cohesive performance that invites anyone in to be a part of the Lily’s journey.