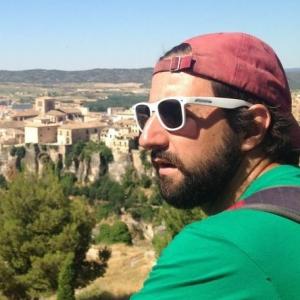 Will Jones grew up in Sturbridge, Massachusetts, about an hour east of UMass. He originally attended the Mass College of Liberal Arts, but transferred to UMass after his freshman year due to the extensive array of courses and opportunities offered. Will graduated in 2015 with a major in Spanish and a certificate in Latin America, Caribbean, and Latino Studies. He first got involved working with the YMCA as a camp counselor in Woodstock, Connecticut during his time in college, and has continued to take on increasing responsibility. He spent three and a half years in Madrid as the International Programs Coordinator at the YMCA of Spain. Will recently returned to YMCA Camp Woodstock as the Summer Camp Director.

“I chose the Spanish major because I had some experience working with kids and doing some leadership programs throughout high school and college already, so I was thinking about maybe working with kids as a Spanish teacher. And it just seemed like it could be something that could open more doors and open doors to international travel.”

A number of different factors influenced Will’s decision to declare the Spanish major at UMass. He remembers lessons and stories from his Spanish teachers at Tantasqua Regional High School. In particular, Helena Páez, Sharon Reese, and Pat Ballard were key figures who reinforced Will’s interest in international travel and the study of different cultures. During Will’s first year in college at the Massachusetts College of Liberal Arts his future plans were unclear. He transferred to UMass due to its large network of opportunity, which is when he de-clared the Spanish major. He had experience working with kids, and saw Spanish as a gateway to expand his interest in the field of youth development. Along with his Spanish major, Will took several education classes, studied abroad in Uruguay, and received a certificate in Latin American, Caribbean, and Latino Studies. He recalls the flexibility of the Spanish program, which allowed him to explore future options and created a myriad of new opportunities.

During the summer between his junior and senior year of college, Will worked as a summer camp counselor at a YMCA camp in Woodstock, in a leadership program. Because he was commuting to UMass, Will was able to accept a position working there during the school year after summer camp ended. In addition to taking classes, he assisted with daily tasks at the YMCA as the Youth Leadership Director. Upon graduation in 2015, Will continued in his role as director of leadership, managing the program in which he had previously worked as a coun-selor. The summer camp was extremely successful, and Will was able to use his Spanish to form connections and facilitate communication.

In the fall of 2015, Will started getting involved with the Greater Hartford YMCA, which is the association to which YMCA Camp Woodstock belongs. He became one of the co-chairs of the YMCA Greater Hartford International Relations Committee, which connected him to YMCA representatives from locations throughout the United States, as well as international board members. Through the committee, Will was introduced to a new initiative.

“Through this International Relations Committee I heard about an opportunity for the Emerging Global Leaders Institute called DIG (Diversity, Inclusion, and Global Innovation). It included all different dimensions of diversity and what we can all do to engage different communities and show that everybody will feel welcome and thrive in the YMCA.”

The program centers around embracing diversity and promoting a welcoming environment at the YMCA. Will attended an orientation for the DIG program in Chicago, which is where he met Renata Ferrari, the Executive Director of Global Development at the YMCA of the USA. A few months later, Renata reached out to Will regarding an available position at the YMCA of Spain.

“I was offered and accepted the job as the International Programs Coordinator at YMCA Spain. A big part of that position involved hiring both bilingual Spanish counselors and native language speakers. My biggest responsibility was helping our international summer camps. We worked with about 22 different camps here in the US, sending Spanish kids and teens to the US YMCA camps. I spent a lot of time explaining what the different programs looked like, the food, the schedule, the cultural differences.”

In May of 2016, Will began his first day of work in the YMCA of Spain as the International Programs Coordinator. His responsibilities included hiring camp counselors, coordinating with international partnership programs, organizing exchanges for international summer camps, and catering to prospective Spanish families. He served as an ambassador for YMCA camps in the US and worked behind the scenes to run exchange programs sending groups of Spanish kids to YMCA camps in the US. Will spent over three years working in this position in Madrid, and returned to the US recently in November 2019.

“I am back here as a Summer Camp Director at YMCA Camp Woodstock. We are coming up on our 100th anniversary in a few years, which is a really exciting time to be here at camp. It is also an exciting opportunity to continue to develop professionally. I think the YMCA is a great organization, one that I would love to continue working with, and be connected to, for a long time. It has a lot of great career opportunities and there is really no limit to the things you can learn.”

Will returned to his position as Summer Camp Director at YMCA Camp Woodstock in December of 2019. He is excited to continue his professional development and work directly with a growing camp staff. His position entails human resource processing, sales, and forming family connections. Will’s hard work and open-minded attitude perfectly complement the values of the YMCA organization, which continues to open doors for him, presenting endless opportuni-ties for personal and professional growth. The Diversity, Inclusion, and Global Innovation pro-gram is becoming a pillar of the YMCA, and Will plans to continue to implement diversity-inclusive practices in the field of youth development moving forward.

“I think that what you are really looking for in a major is different experiences, different points of view. What I have liked about the Spanish department and Spanish degree is that you are able to use it to piece together what you are looking for. I think that the biggest point is that it will never close any doors, but it will certainly open more. My biggest accomplishments were definitely brought about by being culturally competent and open, which was a direct result of my education.”

The Spanish program at UMass gave Will the flexibility to piece together his interests. He paired his major studies with a certificate and even worked between 20 and 25 hours each week at YMCA Woodstock during his senior year. One of the biggest life lessons that he has carried with him throughout his career stemmed from his Latin American literature classes at UMass, taught by instructor Emma Rivera-Rábago. The underlying lesson of her courses encouraged students to be open-minded, analytical, and to use empathy and understanding to create bridges with people who are different from oneself. Will attributes his professional success not only to the language aspect of his studies, but also to the soft skills such as empathy and cultural com-petence that were instilled in him during his time at UMass.