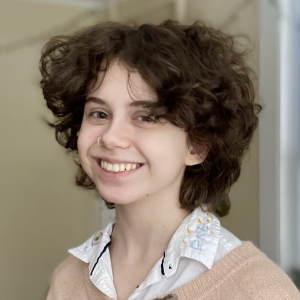 Noelle McManus is from Long Island, New York. She is a current senior at UMass Amherst and expects to graduate in May of 2021. She is pursuing a dual degree in Linguistics and Spanish with a minor in German. Her interests lie in the field of writing and publishing as well as literary translation, a passion that began with translating songs and poetry in to English as a way to practice her Spanish and developed further in Spanish-language literature classes, where she learned the value of sharing art cross-culturally. Noelle’s intercultural studies at UMass combine knowledge with creativity and have opened her eyes to a wide range of perspectives and writing styles.

“I’ve always really liked Spanish. My studies have given me a big basis for translation, and I’m interested in going into publishing and writing and maybe being a novelist. Knowing another language is really good for being able to write and understand anything, even in your own native language. The more books you can read and the more perspectives you can get from other people’s writing, the better your writing will be. With this experience, I was able to write essays on linguistics and book reviews of translations for the Wellesley Center for Women’s Women’s Review of Books. That later allowed me to get a job as an assistant editor there, as well for independent publishing house Dottir Press, which I’ll continue to work for after graduation.”

Noelle was drawn to UMass due to the impressive linguistics and language programs. Spanish has always been her best subject in school, and she is confident that her language studies will continue to be an extremely valuable asset throughout her professional undertakings. The ability to understand Spanish elevates her literature skills as a whole, broadening her cultural horizons and varying her perspectives in writing.

Outside of classes, Noelle is also heavily involved in the Spanish program and the local Spanish-speaking community. She facilitates weekly Spanish language creative writing workshops for the Salud y Bienestar of Pioneer Valley program. In this role, Noelle provides poetry and writing prompts to which participants respond and are able to share their work. The virtual workshops are open to anyone, thus allowing for interaction between UMass students looking to practice their Spanish and community members interested in expressing themselves artistically. Noelle enjoys her leadership role in the workshops, as they effectively combine her academic interests with her passion for creativity.

“Literary translation is also something I want to do. I see it as a different form of writing. Even in high school I would translate songs and poems just for fun. It’s really great because at the same time as adapting this, I do get to write and be creative. It just feels like an extension of writing.”

Noelle’s experiences at UMass have acquainted her with the practice of literary translation. She has spent time translating song lyrics and poetry and picking up on the intricacies of conveying the precise meaning of an original text in a different language. Currently, Noelle is enrolled in Spanish 514 Practicing Literary Translation, and she is working on her senior year Honors thesis, a translation of the 2019 novel Estás muy callada hoy by Ana Navajas. The book is a unique portrayal of grief and loneliness, told from the perspective of an Argentine mother who must reevaluate her agency in her own life. It has a stream-of-consciousness narration that moves back and forth between events, times, and characters, a challenge that Noelle was excited to undertake.

Noelle’s advice to a student considering studying Spanish or Portuguese:

“Do it and try to get involved in the program. There’s a lot of really good resources for internships and job experience, and they can help you get the most out of it and learn more than you would if you were just attending class.”

The Spanish and Portuguese Program at UMass has always felt like an inclusive community to Noelle, and she is grateful for the professors that have supported her along the way. Specifically, Professors Barbara Zecchi, Danielle Thomas, Guillem Molla, and Luis Marentes have guided and inspired her involvement in several extracurricular opportunities. For example, she has worked as a Teaching Assistant for two years and has interned with the Catalan Film Festival. She was also featured on a podcast hosted by Magdalena Gómez, former Poet Laureate of Springfield, MA. Noelle recommends that prospective students in the Spanish and Portuguese Program also get involved in the community and take advantage of the plentiful resources offered.

In the future Noelle hopes to return to Argentina, where she spent a semester studying abroad. She is very fond of Argentinian Spanish spoken in Buenos Aires, and she misses the people, the food, and the city as a whole. The classes that Noelle had taken at UMass prepared her to the level where she was able to partake in productive literature courses in Argentina, while simultaneously broadening her cultural horizons.

Upon graduation, Noelle plans to continue following her passion for writing. Through her college years she has acquired ample experience in the fields of poetry, creative writing, and literary translation. Noelle’s excitement for language and linguistics is evident and will serve her well in her future endeavors.