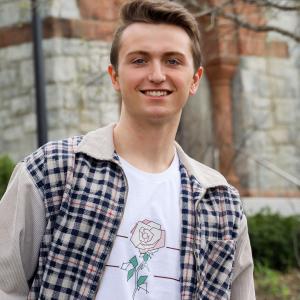 Nick Jones is a senior linguistics and Spanish double-major from the Southshore of Massachusetts. He was originally in the graduating class of 2022, but he is able to graduate a year early in the Spring of 2021. Spanish has provided Nick with many opportunities to work within the Spanish-speaking community and elevate his cultural competence. In the future, he plans to pursue graduate studies at the University of Oxford in the UK.

“During my years of high school, I had an incredible Spanish teacher that instilled a passion for the language in me. I originally was not planning on doing the major, perhaps a minor instead. After seeing the similarities between the two and the greater liberty of choosing courses if I were a major, I was sold.”

Nick’s original interest in the Spanish language stemmed from his high school experiences. Inspired by one of his teachers in particular, Nick grew fond of languages in general. He began his studies at UMass with a minor in Spanish, but decided to switch to a Spanish major after learning about the flexibility and scope of the program.

Outside of classes, Nick has been very active within the community, taking on several professional opportunities. He worked at a translating event in Holyoke to provide translations of services for the elderly to the elderly Spanish-speakers of the community. This was his first real exposure to the Spanish-speaking world outside of an academic setting. He also recalls an impactful course at UMass with Luis Marentes that provided translation support to Providence Ministries of Holyoke who support the low-income community with accommodation, food, and career training.

“My studies in Spanish have helped break me out of the cultural bubble that I had been living in as a white, English-speaker living in the United States. I have been exposed to many different cultures of the Spanish world and each one is as beautiful as the last. My Spanish education is something for which I will eternally be grateful.”

Nick’s Spanish studies have opened his eyes to new perspectives and ways of thinking that he otherwise would be unaware of. His cultural competence has grown tremendously, which is something he is extremely thankful for.

“One of the most memorable parts of studying Spanish at UMass would be the opportunity to be an undergraduate TA for SPAN 311: Advanced Spanish Grammar. Additionally, I am looking forward to finishing my Honors Undergraduate Thesis with Danielle Thomas.”

Assistant as an undergraduate TA for Spanish 311 has not only honed Nick’s skills as a student studying Spanish, but has allowed for him to teach these skills to other students as well. He hopes to spark their interest in being a part of the Spanish and Portuguese program. In addition to being a Teaching Assistant, Nick is a part of the Commonwealth Honors College. He is excited to complete his Honors Undergraduate Thesis, as it is extremely satisfying to see all of his hard work come together to create something great and productive.

“In the coming Fall of 2021, I have accepted an offer to pursue graduate studies in Linguistics, Phonetics and Philology at the University of Oxford in the UK.”

Upon graduation from UMass, Nick is excited to continue his studies as a graduate student at the University of Oxford in the UK. He hopes to receive his PhD one day in order to work for a University as a professor or researcher. His Spanish studies at UMass have established an excellent foundation for Nick’s future professional endeavors.