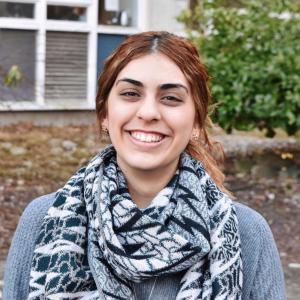 Melissa Rodríguez is a sophomore at UMass Amherst. Originally from Cuba, she moved to the United States four years ago and now lives in Winthrop, MA. Melissa is on the pre-med track, pursuing a primary major in Biochemistry and Molecular Biology, as well as a secondary major in Spanish and a certificate in Translation and Interpreting. She is passionate about representing the Latino community, particularly in the field of science and medicine.

“In my search for inclusion and belonging on this huge campus, I found the Spanish and Portuguese Studies Program and was embraced with the warm welcome. I discovered another part of UMass that was completely new for me. I decided to major in Spanish, not for the language, but for the culture and the people it represents. Here in the Spanish Program not only I have been using my mother tongue more often, but I have also continued to study literature in Spanish, something I began in Cuba.”

When Melissa first began her studies at UMass, Biochemistry and Molecular Biology was her only major. Her adaptation process here was not easy, as she did not feel like she fit in with the rest of her class. Homesick and missing her family and culture, Melissa longed to find a community on campus that would foster a sense of inclusion. The Spanish and Portuguese Studies Program became just that, embodying the warm and welcoming nature of her culture at home. The Spanish major also allows her to delve into the cultural aspect of the program, and continue her literature studies that she began in Cuba.

“Before applying to college, I was involved in multiple volunteer programs working mostly with the Latino community in Boston, especially in medical and health related settings. In these programs I did several types of interpreting- and translation-related work. Here at UMass I wanted to further this experience and bring it to an academic level, so I decided to pursue the Certificate in Translation and Interpreting.”

Melissa has worked in multiple volunteer projects in the South Boston area that are connected to Boston Cares. The project in which she became most invested was run by the Volunteer Department at the Cambridge Health Alliance Hospitals. For a year Melissa served as a Volunteer Health Advisor, helping the Latino community become familiar with the way the medical system works in the area. The project also conducted health education classes on churches and schools, with the goal of increasing awareness of common diseases that affect the community, and provided free HIV and blood pressure screenings, among other services. In most of these events, Melissa helped the people who only spoke Spanish.

With her experience in the Latino community in Boston, the Certificate in Translation and Interpreting seemed an excellent supplement to Melissa’s academic endeavors. Not only is she acquiring knowledge through classes, but she also gains experience working at the UMass Translation Center.

“I finally found my purpose at UMass and in the community in general. I realized I could be the voice of a whole community, especially in the science and medical areas, where Latinos are still the great minority. The ability to use my language on campus and in my academic work, helps me feel powerful. It is a considerable part of who I am. I want to use the rest of my years at UMass to grow as a person and as a member of this community.”

Since joining the Spanish and Portuguese Program, Melissa’s personal and professional goals have changed drastically. She realized that she can incorporate her Latino culture into the field of science and medicine. Her knowledge of language and translation empowers her to represent Latinos in the community. Melissa looks forward to continuing to learn and grow at UMass, and she plans on attending medical school after graduation.