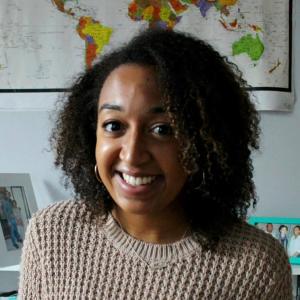 Krista Webb is a Class of 2017 UMass alumna from Templeton, Massachusetts. She graduated with a major in Spanish. Both her mother and her paternal grandmother are from Bermuda, and she accredits her natural love for travel with the trips she took as a child visiting her extended family in Bermuda. Before Krista’s senior year of high school, she decided that she would major in Spanish in college. She was inspired to immerse in different cultures as a global thinker. During her time at UMass, Krista was involved in community volunteer work and was an athlete on the track and field team. Upon graduation, she spent time working, traveling, and volunteering. Krista has been employed since January 2019 as a bilingual caseworker in the Unaccompanied Refugee Minor Program at Ascentria Care Alliance.

“After having studied Spanish in high school I actually went to Guatemala with my Spanish teacher. After that trip I started going back to Latin America and really fell in love with the language and the culture. I saw that there were opportunities to do service work, especially in Latin America, and that was a big part as to why I wanted to improve in the language. I knew I wanted to use it to serve.”

Krista’s high school trip to Guatemala opened her eyes to the countless opportunities there are to do service work. It was her first glimpse into cultural disparities and major lifestyle differences. The trip influenced her desire to work in underserved communities, and she has since returned to a number of Latin American countries.

“And I do believe that when you are traveling to a place where they are not as privileged, it really makes you to consider your privilege and how fortunate you are. I took those experiences and I couldn’t not do anything about it. I knew that I wanted to do something about people living in these situations that were less fortunate. Because I have privilege and opportunities I want to be able to use that for good, to help others.”

Krista’s studies at UMass allowed her to delve into different cultures and lifestyles. Her studies and travels provoked introspection and self-reflection regarding her own lifestyle as well. Krista believes that traveling is one of the greatest teachers, and she is grateful that she can use her own privilege and understanding to make a difference in the lives of others. She continues to seek out opportunities to utilize her Spanish fluency to help individuals and communities both internationally and here in the United States.

Despite being a part of the track and field team at UMass, Krista was able to travel abroad to Argentina to further pursue her studies. In Buenos Aires, Krista was exposed to a different variety of the Spanish language than she was used to. During this experience, it became clear to Krista that she is most comfortable in rural, service-driven environments.

“Right after I graduated I worked in Springfield, through the Americorps program, which is like the Peace Corps but for the US. I did a six-month term working in Springfield with homeless young adults. After that, I spent the summer traveling and volunteered in Colombia. I was with a woman in a small mountain town who was an elementary school teacher, so I spent some time volunteering at schools in the area, and in the English classes specifically. After that I came back, I left again for Uganda.”

In Uganda, Krista was leading soap-making workshops in refugee camps near South Sudan. She was volunteering for a program known as Esperanza Soaps, founded by Kevin Moforte. Krista met Kevin Moforte through the church, during her time at UMass. Jabones Esperanza (Esperanza Soaps) is a small enterprise based in Las Malvinas, a slum in Santo Domingo (Dominican Republic). It trains women in the area on how to make soap, which is then sold, providing a source of employment and income for the women in the slums. A mutual friend of both Krista and Kevin had done mission work in Uganda, and wanted to try to bring the soap project to the refugee camps there, where the people had no means of providing for themselves. When this opportunity arose, Krista was eager to accept a volunteer position. Implementing the project in Uganda is a work in progress, and Krista is extremely thankful for the experience.

“Kevin, the founder of Esperanza Soaps, had asked if I would be willing to go down to the Dominican Republic and help direct the company for a time. And I said yes! It is not every day that these opportunities are offered to you. This is where my heart was, continuing to serve. And so I went down to the Dominican Republic and helped lead this small company for seven months.”

Recognizing Krista as a bilingual service worker and faithful volunteer, the founder of Esperanza Soaps proposed that she travel to the Dominican Republic to direct the company for an extended period of time. Excited about the opportunity to continue travelling and serving, Krista accepted the offer. She spent seven months volunteering in Las Malvinas. She lived in the slum for about half of her time there, and outside of it, with a host in a local community, for the other half. Living in the slum allowed Krista to host others in the community and experience life directly alongside the women. While outside the slum, she lived with a young woman in the local church, named Cristina. Krista and Cristina became close friends. Living outside of her workplace allowed her to separate her personal life from her professional life, and it provided her with a support network during a very independent period of time. Both inside and outside the slum, Krista’s overall time in the Dominican Republic working with Esperanza Soaps was a memorable, challenging, and enlightening experience.

“The program in which I am now working as a caseworker is called the Unaccompanied Refugee Minor Program. The clients in this program are aged 18 to 22. Most of them are coming from Central America, some are also coming from different African and Asian countries. But because I speak English and Spanish, all of my caseload is made up of clients from Latin America.”

Krista currently works as a bilingual caseworker, and she truly appreciates the time that she gets to spend with clients. Her compassionate nature is an integral trait in her work with young clients. Though social work is not an easy job, Krista is inspired by her clients’ resilience while moving forward in the United States without family. She strives to be a consistent figure in their lives and to learn as much as possible from her work. Krista recalls a class that she took as an undergraduate student that strongly impacted her professional goals. It was a class on Gender and Immigration offered at Amherst College which addressed the journey and hardships that immigrants face while coming to the United States from south of the border. The lessons from the course correspond directly with her current role as a bilingual caseworker in the United States.

Krista’s advice to a student studying Spanish: “I would say definitely study abroad, if you can. I do believe that being immersed in the language and using it in a practical sense is very helpful. You really learn leaps and bounds when you are putting language into practice, for sure. And when you step outside of your community, what is known to you, you question yourself. I would say you also see what’s truly important in life.”

In the future, Krista is excited about continuing to learn and use her position to do good. Her bilingualism and cultural fluency continue to open doors for her. She will continue to pursue her passion of empowering, teaching, and serving others.