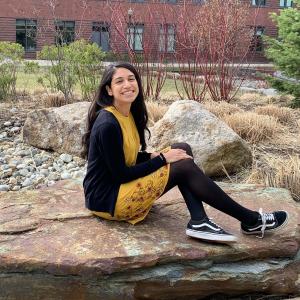 Kelibeth Resto-Albelo is an alumna from Springfield, MA. She was born in Puerto Rico and attended Springfield Technical Community College for two years before transferring to UMass Amherst, which forced her to reconsider her Spanish-speaking identity in a multicultural university. With encouragement from her advisor, Kelibeth decided to pursue the Spanish major. This allowed her to incorporate her heritage into her studies and take advantage of her bilingualism on a professional level. Upon graduation in September of 2020, Kelibeth took on a position as a Parent Facilitator at Springfield Renaissance School as she plans to pursue a career as a teacher. She expects to get her Master’s degree in Education.

“When I arrived at UMass, I was so overwhelmed by all the cultures and languages. I didn’t understand fully what it meant to be a Puerto Rican Spanish speaker. That led me on a journey of discovering who I was as a Spanish speaker and Puerto Rican in a multicultural university.”

Kelibeth attended high school in Springfield, MA which is a largely Spanish-speaking city. She then attended Springfield Technical Community College for two years before transferring to UMass Amherst. The transition to a multicultural university was overwhelming, as Kelibeth was accustomed to her Spanish speaking community in Springfield.

“I was raised in a Puerto Rican household speaking Spanish all the time. Even though I didn’t speak it, I understood it, and I was kind of ashamed of the language, so at UMass I first took every other route. I love languages and cultures a lot, but I didn't want to focus on my own language.”

Even in her high school, there was a tendency for Spanish speakers to reject their cultural identities. When she came to UMass, Kelibeth was resistant to declaring the Spanish major right off the bat. She attempted Chinese, Italian, BDIC, cross-cultural translation, and linguistics, but the courses did not exactly align with the multicultural education she desired. With encouragement from her advisor, Kelibeth eventually decided to dive into the Spanish major.

“The classes at UMass really taught me how diverse I am as a bilingual speaker. There is so much more to the language, like the grammar, the different levels of formality, the different ways of speaking it. Because I was coming in as a Spanish speaker and other students were coming in with English backgrounds only, I had so much to offer, and I didn’t even know that.”

The Spanish courses at UMass opened Kelibeth’s eyes to the complexities of the language. Coming from a Puerto Rican household, she learnt to embrace her diversity as a bilingual speaker and incorporate her cultural competency into her studies.

“I think what really impacted me was doing the bilingual lessons with the children at Amherst. That started to help me think, ‘Okay, what can I do professionally with a Spanish major?’ I can be a translator, I can be a teacher, I can do so many things with the major now that I never even thought about.”

As Kelibeth contemplated her professional goals, she was pleasantly surprised by the variety of potential career opportunities that she could pursue with her degree in Spanish. During her time at UMass, Kelibeth was involved with the community, providing bilingual lessons to children in Amherst. The idea of becoming a teacher was of particular interest to her, so she decided to move forward in the field of education, with a focus on bilingualism. She is going to be working on secondary literacy with children of between four and eight years old.

Upon attending a career fair at UMass, Kelibeth was introduced to a program known as Urban Teachers. Urban Teachers is a graduate program in education that provides students with hands-on experience working in classrooms and developing their skills in the field. Kelibeth plans to acquire a Master’s degree in education with a certificate in bilingualism. She is excited to both further advance her education, and gain experience teaching.
Kelibeth’s advice to a student considering studying Spanish or Portuguese:

“I definitely advise students to dive into their own culture first and explore more. There is so much you can learn from your own heritage. Embrace your own ethnicity, embrace your upbringing, don’t shy away from it.”

Through the Spanish major Kelibeth truly embraced her culture and ethnicity while elevating her previous knowledge of the language. She strongly encourages prospective Spanish students to dive into their unique backgrounds and embrace who they are as well.