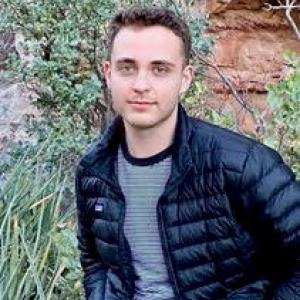 Collin Bardwell is a class of 2020 alumnus from Hatfield, MA. He graduated on the pre-medical track with a Bachelor of Science in microbiology and a Bachelor of Arts in Spanish. Not only did Collin graduate with two degrees, but he was very involved on campus as a part of both the Commonwealth Honors College and an undergraduate research lab. During his time at UMass, he also earned clinical experience working as an EMT in Springfield, which exposed him to the intersection between the fields of medicine and Spanish. Upon graduating, Collin has continued in his role as an EMT and plans to attend medical school in the future.

“I initially chose Spanish more for familial reasons. Along the way I decided that I wanted to pursue medicine at the same time, and that’s when Spanish took on a different meaning for me. As a student who was starting to take medicine more seriously, I saw that the United States has such a large population of Spanish speakers. It became clear that learning Spanish can be very important for someone who wants to be a good solid provider in the United States. You can provide healthcare service to as many people as possible.”

Collin first started learning Spanish in high school. It was a natural choice, seeing as he has familial ties to Puerto Rico and Colombia. It wasn’t until he took an interest in medicine that he truly realized the importance of studying Spanish and how it would help him professionally. Communication is key to being a skilled healthcare provider, and the ability to speak Spanish greatly facilitates communication with native speakers. It also opens the door to innumerable more opportunities to serve the community and form connections with patients. As an EMT, Collin attests that Spanish elevates his ability to handle medical emergencies and offer support to patients and families.

“If you get to a call and the person doesn’t know English that well, it’s really difficult to communicate and understand what is going on with that patient. Knowing Spanish has improved that so much for me. Going into these situations being able to comfort the patient and let them know that you understand the problem makes the whole entire situation a lot better, and a lot safer because you have that communication.”

Some of Collin’s most memorable experiences as an EMT include moments of chaos due to trauma or pulmonary conditions, of which he has been able to serve as a source of comfort. When an individual or a family is experiencing an emergency, the scene can be very chaotic and stressful. Adding a language barrier on top of that only adds to the chaos. With a high Spanish-speaking population in Springfield, Collin’s ability to understand and speak Spanish during these moments of uncertainty is extremely valuable. Clear and straightforward communication helps alleviate anxiety and calm down panicked patients and families. Evidently, Collin’s Spanish studies coincide with his work facilitating emergency situations as an EMT.

Not only does Spanish enhance his professional endeavors, but it has influenced him on a personal level as well.

“Learning a language changes your outlook on a bunch of things culturally because. Although I just learned Spanish technically, along the way I’ve learned a lot of cultural elements as well. Learning Spanish since high school and all the way through college and doing two study abroad experiences really opened my eyes to traveling and just exploring something that I may be uncomfortable with.”

Having an understanding of the Spanish language has accelerated Collin’s cultural competence. He now feels more comfortable approaching unfamiliar situations with an open mind and sense of ease. One of the first classes that transformed Collin’s way of thinking was Spanish 311- Advanced Spanish Grammar. The course was impactful because it helped him think like someone who is from a Spanish-speaking country and emulate their thought process when formulating a sentence. It served as a strong basis for the subsequent literature and cultural courses that he enrolled in.

In addition to his courses at UMass, Collin studied abroad, in Valencia and Salamanca. He went into the programs with an open mind, not knowing what to expect. Overall, he spent four months in Valencia and one month in Salamanca, both of which flew by. He recommends that students who are able to study abroad try their best to have the most immersive experience possible in order to truly have a strong command of the language.
Collin’s advice to someone considering studying Spanish or Portuguese at UMass:

“You have to go in with a reason because if you don’t have the motivation it’s easy to get a little sidetracked. It’s important that people realize that you have to have a certain amount of commitment because it’s not easy. If you’re able to keep with it and do it consistently and even go beyond the classroom, of course it’s going to benefit you. You really just need to buckle in and pursue it as much as you can.”
Collin’s EMT job gave him an opportunity to practice Spanish every weekend outside of the classroom. He also volunteered at the Jones Library in Amherst where he practiced his Spanish with language speakers, simultaneously teaching them English.

“You have to search up these opportunities, they’re not just going to land at your doorstep. And if you do, and it doesn’t have to be all week every week, they help. These little things add up and you’re going to leave UMass with a much better grasp of Spanish than you otherwise would.”

Collin was very involved in the campus and local community during his four years at UMass. As a volunteer, EMT, undergraduate researcher, dual-major, and honors student, he truly made the most of his experience. In the future, Collin plans to continue working as an EMT while he takes on the medical school application process. He is confident that Spanish will continue to benefit him in his long-term endeavors, and he plans to continue learning and keeping up with his Spanish studies.

“I’m going to be taking a professional medical course so as I learn a lot more about medicine, a lot more about the body, I’m hoping to duplicate that in Spanish. It’s an ongoing process and maintaining Spanish is of course going to be difficult as a non-native speaker, so as long as I keep up with it, I think it’s going to be good for me.”

Collin is aware that learning is an ongoing process that goes hand in hand with the field of medicine. He looks forward to applying his knowledge of the language in his professional and personal life.