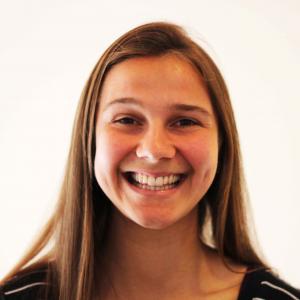 Brook Hansel is a senior student from Lunenburg, Massachusetts. She will graduate at the end of spring 2019 with a primary major in Spanish and a secondary major in History. She is an athlete on the UMass cross country and track and field teams, and a member of the Commonwealth College. Next fall Brook will be living in Galicia, Spain. She has been awarded a Fulbright Fellowship to teach English at a multilingual secondary school and to engage the community by developing a running program for girls that focuses on self-confidence, leadership skills, and cross-cultural team building. Brook tells us that she always wanted to become a teacher, but that it was only when she started working with students in Spanish-speaking communities that Spanish became really important in her life.

“In the summer after my freshman year, I worked at a camp for kids at the Spanish American Center in Fitchburg, Massachusetts. I led activities and connected with kids, parents, and other counselors at the center in both Spanish and English. At the time, I would say my Spanish was at more of an intermediate level. The community at the Spanish American Center was so encouraging as I worked to become more fluent in Spanish. I decided to improve my Spanish when I saw how it allowed me to build relationships within a new community, to share experiences and ideas.”

During her sophomore year, Brook tutored at the Care Center, a school in Holyoke for young mothers studying to earn their high school equivalency degrees. Holyoke is a city with a large population of Spanish speakers, the language that many of the women Brook tutored spoke.

“I always enjoyed talking with them before and after class, and hearing about their families and their aspirations as well as their experiences during their time in school. As I learned more about them, I came to understand that, just as important as it is for teachers to be bilingual, educators also need to learn about the diverse cultures of the students and help them bring their own perspectives and experiences into the classroom. I came to believe that great teachers build learning experiences around what is meaningful and important to their students’ lives. I became passionate about the idea of finding engaging ways to connect the curriculum to my students’ lives and background.”

When Brook noticed that key connection between language, culture, and teaching, she started to build her course of studies at UMass around Spanish, Latin American/Latinx History, and Bilingual and Multicultural Education. Some of the classes she has taken, and the instructors she has had, have been instrumental to pursue her goals.

“Gina Malagold was my teacher for Junior Year Writing in Spanish, which I took during my sophomore year. Gina is a Ph.D. student. She always shared her experiences and passions with our class, which for me was truly inspiring. One of the projects for her class was to write a ten-page research paper in Spanish. Gina not only guided and supported me through the writing process, she also made me realize, for the first time, the excitement of doing research. We have stayed in touch over the years. She was the person who encouraged me to apply for the Fulbright award and who supported me and advised me throughout the application process.”

Brook also cherishes her memories of the professors, and the classes she has taken, in the College of Education. For instance, she feels thankful for the creativity, passion, and joy that professors Sharon Edwards and Bob Maloy brought to the classroom in a course Brook took with them, “Tutoring in Schools,” as well as in “New Development in Secondary School History and Political Science.” Brook also served as a TA in professors Edwards and Maloy’s classes, and worked with them on an independent study project Brook completed in a local school. Professor Laura Valdiviezo was Brook’s instructor in “Bilingual and Multicultural Education,” and she was fundamental to help Brook pursue goal of teaching in meaningful ways in linguistically and culturally diverse communities. Brook especially appreciates Professor Valdiviezo’s insights and support while completing her Honors Project.

Brook’s memories of being a Spanish major are, of course, linked to her professors and advisors in the Spanish program: “What I’ve enjoyed the most about being a Spanish major has been connecting with my instructors and advisors in the Spanish department. The faculty in the Spanish department is really personable and excited to engage with their students, which has been something that has stood out to me during my time at UMass. At a large university, it has been important for me to have those personal connections with people who know who I am and what I’m passionate about. The faculty have advised, mentored, and supported me throughout my time here and I’m really thankful for that. I’ve also really enjoyed the Cafe Olé conversation hours to have the opportunity to talk with Ph.D. students in the Spanish department and learn about their experiences.”

Last summer Brook taught reading and coached track and field with middle school students in Holyoke. She loved the challenge of working with kids of that age and teaching to help them think critically and innovatively. Brook’s long-term goal is to return to Holyoke to teach and coach at a middle school.