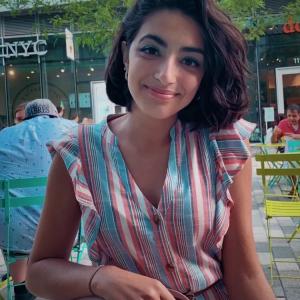 Adriana Almeida is a senior from North Attleboro, MA. She is triple-majoring in Communication Disorders, Spanish, and Portuguese. As a Portuguese heritage speaker, Adriana is passionate about diversifying the field of Speech-Language Pathology (SLP). Since 2016 she has worked as a paraprofessional with young children that have cognitive behavioral disabilities at the early learning center in her hometown. At UMass, Adriana is committed to fostering inclusivity within the communication disorders department. Upon graduation, she plans to pursue a master’s degree at the UMass Amherst Speech-Language Pathology program.

“Even though my mom was born in the United States and my dad came here when he was five, they still acquired their Portuguese perfectly because they always spoke Portuguese at home with their parents. So as the first child, my parents only spoke Portuguese to me. My Portuguese heritage led me in as to why I wanted to take Portuguese in college.”

All four of Adriana’s grandparents are from small villages in Portugal. Her maternal grandparents moved to the United States before her mother was born. Her paternal grandparents moved to the United States from Portugal five years after Adriana’s father was born. Both of her parents grew up speaking Portuguese at home, which carried over to Adriana’s childhood. Growing up Adriana primarily spoke Portuguese at home, but as is the case for many second and third generation bilingual children, English starts to take over with time.

“Right before I went to kindergarten my parents started teaching me and speaking to me in English more. Then I went to school and that became my dominant language. It was always easier just to speak in English, but the older I got the more I realized I really wanted to get better with my Portuguese.”

Upon entering the school system, Adriana began primarily speaking English. Despite having a clear understanding of the Portuguese language, her younger brother and sister similarly grew up speaking English. With time, Adriana took an interest in progressing her Portuguese fluency and enrolled in a Portuguese school. Unfortunately, the Portuguese school lacked proper structure and funding. After a couple years Adriana realized she was not getting the proper resources she was hoping to receive there and left the program. In addition, Portuguese was not offered as a language course at her high school.

“Before college I already knew what I wanted to study. I was always interested in Speech-Language pathology, and I was already noticing that I wanted to serve the bilingual community. So I always loved the fact that UMass offers Portuguese, Spanish, and Communication Disorders.”

The depth of the UMass language programs at UMass was highly appealing to Adriana as she applied to colleges. In her hometown, she didn’t fully utilize her Portuguese speaking skills outside of family and religious gatherings, so the UMass Spanish and Portuguese programs were an added bonus, allowing her to pursue language studies on top of her courses within the Communication Disorders major.

“As for the Spanish major, I came with that intention. During high school I picked up Spanish right away because of the similarities with Portuguese and I fell in love with the language and the culture. I also knew that there’s such a big population of Hispanic and Latinx communities in the United States and it’s the second most spoken language so it would be silly not to learn it.”

Though Adriana’s high school did not offer Portuguese courses, she took an interest in Spanish due the similarities between both languages. She has since continued to study Spanish as a triple major. Her love for the study of phonetics, pronunciation, and dialects is evident through her academic workload.

Through her Spanish and Portuguese studies at UMass, Adriana has learned the value of making mistakes and learning from them. She refers to it as a learning process, connected to both academic and personal growth.

“With the UMass program of Spanish and Portuguese, I’ve taken numerous classes that have shown me that language is connected to history, culture, race, and power dynamics. Taking language courses really does open up your eyes to a sociocultural perspective. I highly recommend that anybody thinking about learning language does it, because you’re going to really broaden your horizons in the long run and become a more developed, culturally-rounded person.”

Several classes and professors at UMass stand out to Adriana in particular. For example, the classes “Portuguese Civilization” and “Spanish in the US” examine the ins and outs of bilingualism, debunking different myths and stigmas. She also acknowledges several professors that have had a positive impact on her education, including Camila Santiago, Luiz Amaral, Tal Goldfajn, Marco Bittencourt, Meghan Armstrong-Abrami, and Patrícia Martinho Ferreira. Adriana highly recommends learning another language to anybody who has the opportunity. Bilingual education not only encompasses a specific language and culture, but it also opens your eyes to different soft skills such as communication, empathy, and understanding. Adriana recalls a time when her grandparents experienced language discrimination at a grocery store in the United States, which motivates her even further to combat prejudice and promote diversity and inclusion in her own life.

“There’s a lack of bilingual Speech-Language pathologists. So even just having a foundation of Spanish and Portuguese allows me to better serve this type of clientele because with this lack of bilingual services, there’s actually more misdiagnoses occurring.”

Adriana’s language studies pair well with her interest in Communication Disorders. Speech-Language Pathologists are responsible for assessing and treating people with language disorders, but there is a lack of bilingual services in the field of Communication Disorders, which leads to more misdiagnoses. Adriana explains how a language difference is not the same as a language disorder. For instance, a Spanish-speaking child will likely pronounce certain words and sounds differently than a child who primarily speaks English. This may result in misdiagnosis by a monolingual SLP, whereas a bilingual SLP will recognize that these phonological “errors” are actually caused caused by language difference rather than disorder.

“I definitely advocate for having more of a foundation in bilingual language development in the ComDis department because yes, it’s important obviously to know English language development, but we’re not just working with one type of population. We have to open up our eyes because the world is more than just what we think.”

At UMass, Adriana advocates for the implementation of more culturally diverse practices within the Communication Disorders department. She is in support of developing a cultural humility certificate, and is an active member of the Diversity, Equity, Inclusion Committee. She is also a part of the Bilingual Language Development Lab for the Communication Disorders department where she translates tele-therapy materials for Speech-Language Pathologists in Holyoke into Spanish.

Evidently, Adriana is extremely active in the UMass community. Not only does she have a hand in the operations of Communication Disorders program, but she also is active in the Spanish and Portuguese language programs. When her schedule allows, Adriana enjoys attending Cafezinho- Portuguese conversation hours. She describes the language department as an extremely welcoming and homey environment.

“My future plans include attending graduate school here at UMass, the Speech-Language Pathology Program. I’m thinking of working in a school setting or a pediatric clinic in the future as well. I also wouldn’t mind going at least once to a Portuguese-speaking or Spanish-speaking country for a couple of months and teaching English to students.”

Adriana has been accepted to the SLP graduate program here at UMass, where she plans to pursue a Master’s Degree. She has always connected with kids and loves working with them, so she hopes to utilize her communication and language skills in a school or pediatric setting. Adriana looks forward to gaining hands on experience outside of the classroom which will not only benefit patients, but also improve her own expressive language skills and confidence. She is extremely appreciative of the UMass Spanish and Portuguese programs for providing her with such a solid, comprehensive foundation of cultural knowledge and classroom experience.