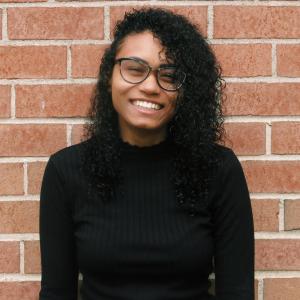 “I think that I enjoy studying both because these two fields of study are preparing me to work with and help others in the future. Since I moved to the United States six years ago and experienced the difficulty of living in a country and not speaking the language, I made it a personal goal to make any place where I work or study, an accessible and welcoming environment for everyone, regardless of what language they speak.”

Adrelys works as an intern in a kindergarten classroom at a Northampton public school. She also serves as an undergraduate research assistant for the Self-regulation, Emotions, & Early Development lab. Last, but not least, she also finds time to work as a student assistant at the UMass Translation Center.

“When I arrived at UMass, Biology was my primary major, but during the second semester of my freshman year I enrolled in an introductory psychology course and fell in love with the field. I realized that working directly with people and understanding human behavior was what I truly enjoyed to study. After taking that class I immediately changed my major from Biology to Psychology.”

Adrelys only declared Spanish as her secondary major during her sophomore year at UMass. She missed using Spanish and did not want lose any of it. Spanish is the only language her parents speak and the only language Adrelys spoke for fourteen years. Many of her friends ask her why she decided to major in Spanish, if she was already proficient in the language.

“My response to that question is that studying Spanish is a lot more than just learning how to speak it, understand it, or write it. As a heritage Spanish speaker, I study Spanish because I am interested in understanding its origins and how its use varies from country to country. I am also interested in learning how the interaction of Spanish with another language, may influence how people speak it.”

Adrelys feels fortunate for living in a country where many people speak both Spanish and English. The contact of both these languages in the U.S. has been a source of fascination for her. She has been able to identify many differences in the ways she speaks Spanish and how her Dominican-American friends, who were born and raised in the United States, do so. In order to keep learning about the different forms in which Spanish is spoken, Adrelys has decided to study abroad in San Sebastián, Spain, where both Spanish and Basque are spoken. She chose to study in Spain because she was seeking more exposure to Peninsular Spanish and was hoping to learn more about variation within the Spanish language.

“Understanding how different people speak Spanish is important to me because it continuously proves how versatile the Spanish language is and that there is not a right or wrong way of speaking it. Also, understanding and exposing myself to different forms of Spanish is important to me because, as a student who is interested in translation, I don’t like the idea of using a neutral form of Spanish in my translations. I do not believe that “neutral Spanish” it is representative of any Spanish speaker.”

After taking one of the translation courses offered by the university, Adrelys also found a passion for translation. The complexity of translation processes fascinate her. She also notices how her
Spanish and her translation work is helping her make some of the places where she works, more inclusive and accessible to others.

“The laboratory where I work as a research assistant is planning to open a twin laboratory in Springfield, where we will be conducting the same research study we conduct in Amherst. Since I am the only research assistant who speaks Spanish in the laboratory and one of the populations that we want to reach in Springfield are Hispanic participants, I have been working on some of the Spanish-language material that we will be using for the study. In addition, since I understand how translation and interpreting work, I will be the one communicating with parents who may not speak English, allowing my laboratory to reach a more diverse population in their studies.”

Adrelys is eager to go abroad and to continue enhancing her knowledge of Spanish language and its use. She wants to continue exposing herself to different forms of Spanish, and to learn from and highlight the beauty of all of the different forms and uses of the language. You may find Adrely’s LinkedIn profile here.