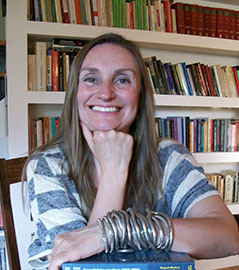 Barbara Zecchi, Professor of Film Studies  (area of Visual and Performance Studies, Spanish and Portuguese Program), Dept. of Languages Literatures and Cultures, and Director of the Film Studies Program at the University of Massachusetts Amherst, is a feminist film scholar, film critic, film festival curator, and video-essayist. She has published and lectured extensively  on European and Latin American cinemas, women filmmakers, feminist film theory, adaptation theory, gender and aging studies, videographic criticism, and on the use of technology in the humanities. Since 2016 she has served as Associate Member of The Film Academy of SPain  (Academia de las Artes y las Ciencias Cinematográficas de España).

​After teaching at different universities in Europe and in the US (such as the Johns Hopkins University, the California State University, or the Universidad Carlos III of Madrid), Barbara Zecchi joined the University of Massachusetts Amherst in 2005, and was promoted to full professor in 2015.  In recent years, she served as Graduate Program Director and Head of the Spanish and Portuguese Unit of the Dept. of Languages, Literatures and Cultures (2011-2015); as Director of the UMass Translation Center (2015-2017), and as Co-Director of the UMass Digital Humanities Initiative Program (2016-2017). In 2017, she was appointed Director of the Interdepartmental Program in Film Studies of the University of Massachusetts Amherst.

In 2011 she launched  the Gynocine Project: Feminism, Women Filmmakers and Film Studies that she is currently directing. Through open access resources (biographies, filmographies, interviews, sillabi, etc.), the goal of the project is to give visibility to women in cinema.  If needed, this UMass faculty profile is also open access.