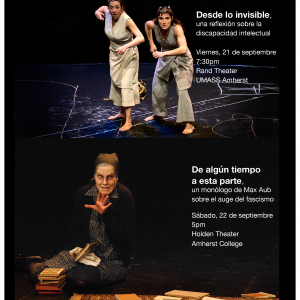 On Friday, September 21, the University of Massachusetts Amherst will host the first day of a two-day conference titled “Theaters of Marginality.” This conference will continue on Saturday, September 22, at Amherst College and will include panels on Spanish, Catalan, and Galician theater and performance dealing with topics of exile, gender, sexuality, religion, translation, adaptation, and performance traditions. Two professional companies traveling from Spain will offer free Spanish-language performances. La Quintana Teatro will premiere their play Desde lo invisible at the University of Massachusetts Amherst’s Rand Theater at 7:30pm. This award-winning play exploring intellectual disabilities was showcased at the Centro Dramático Nacional in May, and will be featured at Teatro Pavón-Kamikaze in Madrid in October 2018. On Saturday at 5pm, the audience will be able to see at Amherst College’s Holden Theater the US premiere of De algún tiempo a esta parte, a monologue by Max Aub, Spanish exile author in Mexico. Spanish actress and researcher Esther Lázaro has masterfully adapted and played Aub’s monologue in the theaters of Barcelona, Madrid, Mexico City, Paris, and Vienna. This play chronicles the harrowing experience of a Jewish woman in the Vienna of 1938, before the onset of World War II.

“Theaters of Marginality” is the second biennial conference of the Iberian Theater and Performance Network (ITPN), which will bring to town scholars from over twenty universities working on theater and performance studies from the early modern period to present times. Professor David Rodríguez-Solás (Languages, Literatures, and Cultures--Spanish and Portuguese) and Professor Catherine Infante (Spanish Department, Amherst College) have co-organized this conference. Professor María Delgado from Royal Central School of Speech and Drama, University of London, will deliver the keynote address on Friday at 4:30pm in the Integrative Learning Center, room S240. Professor Delgado will talk about her groundbreaking research in film and theater “observing rehearsals and discussing the setting up of the sequence of actions that makes up the theatrical performance.” More information about this conference, including a complete schedule, and details of the Spanish-language performances can be found at http://blogs.umass.edu/marginality.