We are a group of undergraduate students who officially represent student voice and the student body to the UMass administration.

We work directly with administrators to influence and change campus policy and decide how to effectively allocate $2 million to Registered Student Organizations (RSOs).

Thanks to the Wellman Document, a legally binding Board of Trustees document, we are the official governing body of UMass undergraduate students, co-equal to the University Administration and the Faculty Senate.

To assess how students view an issue, administrators often look first to the SGA. We are your representatives to the higher ups!

The SGA’s job is to serve, represent, and advocate for students. This is why we wholeheartedly subscribe to our Consultation Policy of reaching out and listening to our constituents when it comes to putting forward or voting on motions that directly impact students.

You can connect with your Class Senators or contact Cabinet Members by visting our Leadership page. If you have a project or campaign idea or questions, please reach out via our Contact Us page.

To establish and protect the democratic system for undergraduate university governance; to promote the general welfare of all university undergraduate students. To create and maintain strong lines of communication between students and university administrators; to work toward greater transparency in administrative decisions.

To protect the accessibility and affordability of the university for all students. To work to acknowledge, appreciate, and expand the diversity of the student body, including socioeconomic, racial, religious, cultural, gender, sexual orientation and political characteristics.

To provide leadership opportunities and development for all undergraduate students and to set the standards which other schools strive to uphold when leading their students into the future. 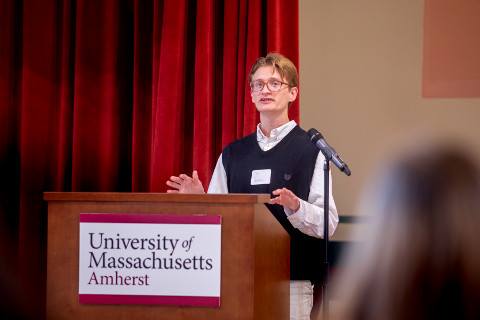 The Legislative Branch is made up of the Senate, which consists of 60 Senators, the Speaker, the Associate Speaker and non-voting Special Assistants.

The 60 Senators represent the Undergraduate Body at the University of Massachusetts Amherst by class year.

The Senate is responsible for passing resolutions and enactments, allocating the nearly $3.6 million budget, and expressing the will of the undergraduate student body on campus.

Senators are appointed to one of the standing committees. Committees tackle projects related to various areas of campus. Committees and their chairs can be found on the Leadership page. Senators can also sit on Faculty Senate Committees or Vice Chancellor Advisory Boards such as the Academic Matters Faculty Senate Council or the UMass Police Department Advisory Board. Notes from these committee meetings are available on the Resources page.

Students should contact their Senators with any concerns or suggestions they may have. Find out who represents your class here (following Fall elections).

Any student interested in affecting change on campus should consider running for Senate. Keep an eye on our website or social media for updates on elections or for vacancies you can apply to fill. Any questions about Senate vacancies can be directed to the Chair of the Outreach and Development Committee here.

The Executive Branch consists of the President, the Vice-President, and their appointed Cabinet.

The Chief Justice chairs all meetings of the Student Judiciary, presides over all hearings before the Student Judiciary, and writes majority or minority ruling, depending on which side their ruling places them. This branch also ensures that all actions of the SGA are consistent with the SGA Constitution, the By-laws of the SGA, and Acts of the Senate. This individual swears-in the President, the elected Senate body, the Executive Cabinet and the Elections Commission.

Once a Petition for a Ruling is filed with the Associate Chief Justice, the judicial timeline begins. Briefs, which are outlines of the legal argument and evidence to be presented in the Hearing, are submitted by both parties. The Judiciary reviews the Briefs and familiarizes themselves with the arguments, and the specific By-Laws before the Hearing. At the Hearing, the Judiciary hears oral arguments, presentations of evidence, and questioning of witnesses. They are allowed to interject at any time and ask any party a question. After the Hearing has been adjourned, the Judiciary enters the Deliberative Session. The Deliberative Session is a closed door meeting, exclusive to the members of the Judiciary who were present at the meetings. The Judiciary weighs all arguments and evidence presented in the Hearing, and begins a dialogue on their interpretations of the By-Laws at hand. A vote is called, and unless there is a unanimous decision, the Chief Justice or the ranking member of the majority or the minority will write the ruling. The Majority and Minority Rulings are an in-depth explanation of the evidence that was presented to the Judiciary, and the rationale behind the decision on each side.