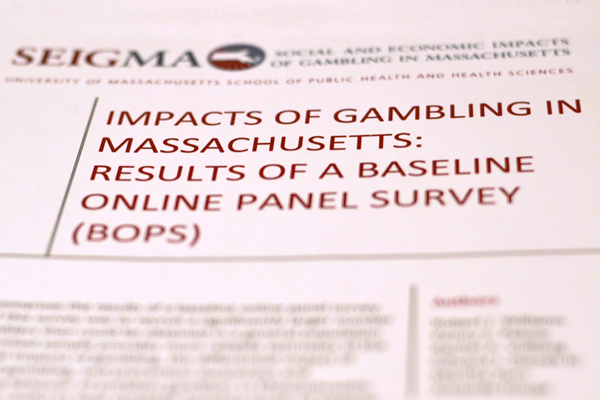 Robert Williams, co-Principal Investigator on the SEIGMA project, is a professor in the Faculty of Health Sciences, University of Lethbridge, in Lethbridge, Alberta, Canada and also a Research Coordinator for the Alberta Gambling Research Institute. He and his colleagues on the SEIGMA Social and Health Impacts Team have just produced a report derived from a Baseline Online Panel Survey (BOPS) of 5,046 Massachusetts residents during 2013-2014.

With the BOPS, we were able to achieve a greater understanding of these issues. Although online panels are demographically representative of the population, they contain an unusually high prevalence of people with various types of pathology, including problem gambling. Using a sample size of half of the BGPS, the BOPS recruited 2.5 times more problem gamblers (i.e., 317 versus 129), which allowed us to address the above issues.

Only a minority of problem gamblers (28.2%) reported that certain types of gambling contributed to their problems more than others. For those that did report this, there was no type of gambling that was overwhelmingly endorsed.

These findings provide a baseline profile of the negative impacts of gambling in 2013/2014. A follow-up online panel survey will be administered in 2020 to examine the change in these impacts as a result of the introduction of casino gambling to Massachusetts.