Rachel Volberg, Principal Investigator on the SEIGMA project, discusses the results of deeper analyses of data from the Baseline General Population Survey (BGPS), a survey of 9,578 Massachusetts residents that was carried out in 2013/2014. 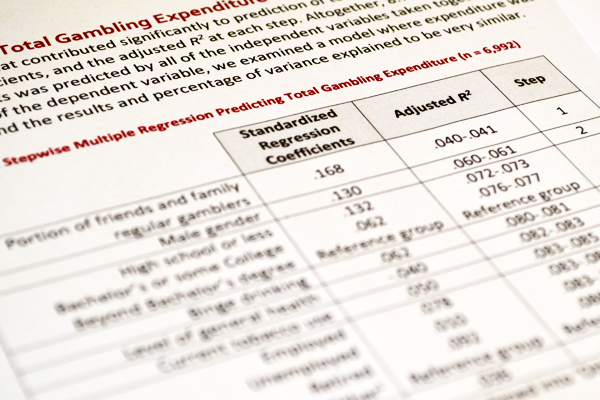 Our BGPS provided a description of the characteristics of non-gamblers, recreational gamblers, at-risk gamblers, and problem gamblers prior to the opening of any casinos in the Commonwealth. Today we are publishing a new report which uses data collected from our baseline survey, but focused on identifying factors that are gambling and problem gambling predictors in Massachusetts.

Our analysis of differences between non-gamblers and recreational gamblers identified several variables that statistically predict gambling involvement. Interestingly, the portion of friends and family that are regular gamblers was the strongest predictor in this analysis, with gambling involvement being associated with more friends/family involvement in gambling. Lower educational attainment, male gender, binge drinking, poorer health, and tobacco use were also predictive of higher gambling involvement.

The study found greater differences between recreational gamblers and at-risk gamblers. At-risk gamblers were significantly more likely than recreational gamblers to be casino gamblers, have a greater portion of friends and family that are regular gamblers, play instant lottery games, play daily lottery games, be male, be online gamblers, be born outside of the United States, participate in private betting, have lower educational attainment, play bingo, not purchase raffle tickets, have lower household income, have mental health problems, and have no alcohol use in the past 30 days.

The greatest differences were found between recreational gamblers and problem gamblers. In order of importance, people who were problem gamblers were significantly more likely to: play daily lottery games, have a greater portion of friends and family involved in gambling, be Black, engage in casino gambling, be male, engage in online gambling, play instant lottery games, have other behavioral addictions, have lower educational attainment, be born outside the United States, and have lower childhood happiness.

These findings have important implications for problem gambling prevention in Massachusetts. For example, the finding of relatively few marked differences between non-gamblers and recreational gamblers suggests that efforts to prevent harm from gambling should be directed to excessive levels of gambling and at-risk gambling, rather than at gambling in general. The social network of gamblers is a particularly important target for prevention, given the strength of the role of friends and family that gamble as a predictor of non-gambling, level of gambling participation, at-risk gambling and problem gambling. Among gamblers, the analyses identified several demographic groups meriting special attention for prevention, including males, individuals with lower educational attainment, immigrants, and African-Americans. The analyses also identified several gambling formats associated with elevated risk in Massachusetts, due to their continuous nature (i.e., casino gambling, instant lottery games, daily lottery games) and/or greater convenience and 24-hour availability (i.e., online gambling).