Ballot questions can be confusing and controversial features of our elections. For many voters, the language used to explain what a “Yes” or “No” vote means can be mystifying, and the abbreviated descriptions used on absentee ballots does not make it any easier. As mail-in voting is likely to increase in a post-pandemic future, could the modified phrasing of absentee ballots change the outcomes of these propositions? UMass students have been on the case.

Hypothesis: Respondents will be more supportive of the shorter version of Question 1 that appeared on absentee ballots than of the longer form of Question 1 on in-person ballots

On the 2018 Massachusetts election ballot, the highly contested Question 1 proposed a law that would set the maximum number of patients assigned to a nurse in a hospital at any given time. Polling leading up to the election found fairly even levels of support for and against the proposition, with a slight edge for “No” in later polls. Question 1 was ultimately defeated with 70% of voters choosing ‘No.”

“This was big politically, especially in Western Massachusetts,” said student researcher Kate Pecora in an interview. “Staffing ratios, if they were mandated, would [give hospitals in the area] very limited time to beef up their staff before they went ahead and started having caps or limiting the number of patients leading to very long wait times.”

Much of the political tension over this question was between hospitals and the nurses’ union. This led the student researchers to wonder whether the mention of nurses’ unions in the language of the ballot question would make the question “politically charged” and change voters’ decisions.

In addition, the students wanted to research how the absentee ballot format would affect voters. In many states, including Massachusetts, absentee ballots often contain abbreviated versions of information, with background information provided on a separate sheet of paper. In-person ballots include all of the information on the ballot itself. This difference led the student researchers to wonder whether shorter versions of the ballot question provided on the absentee ballot could have an effect on support for the proposition. 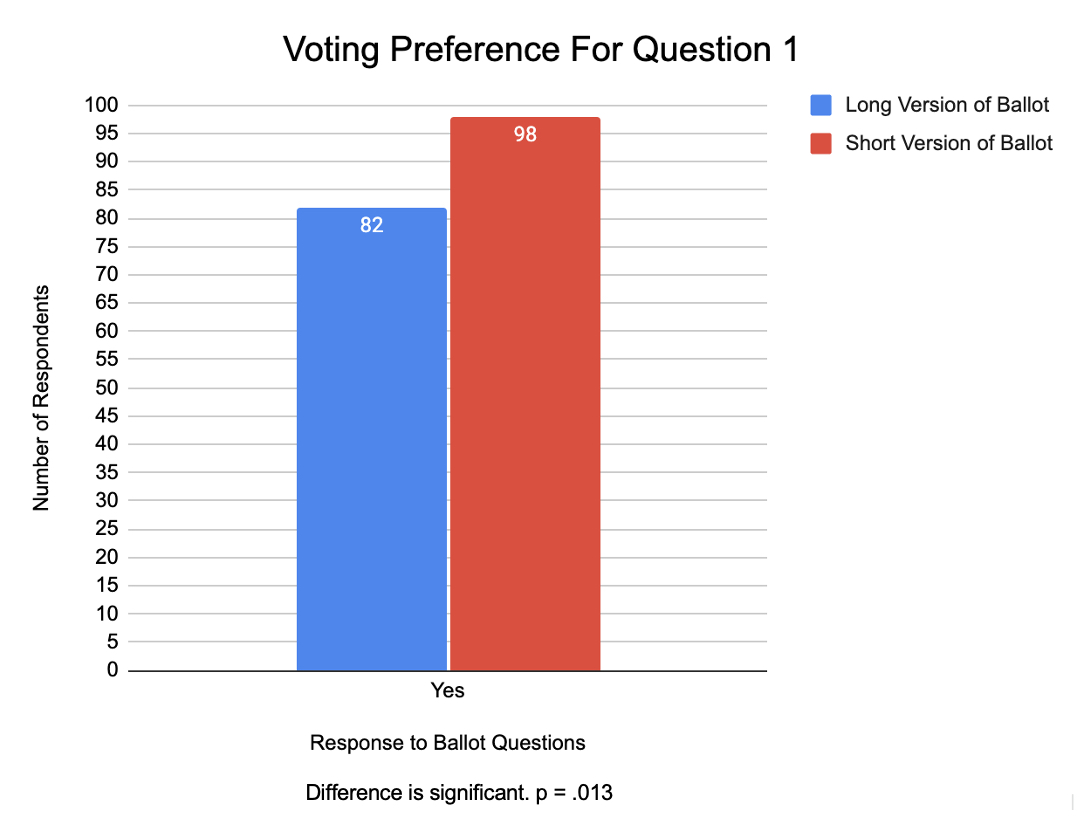 To test their hypothesis, the researchers recruited 233 subjects from outside of Massachusetts using Amazon mTurk for a survey experiment implemented in Qualtrics. These participants were randomly assigned to one of four conditions. Two groups were asked the long version of Question 1 that appeared on the in-person ballot, while the other two groups received the shorter version from the absentee ballot along with a pop-up window that showed the supplemental information. Within those groups, participants were either asked a version of the question that mentioned nurses’ unions or did not.

The students found a statistically significant difference between the groups who received ballot questions of different lengths. Support for Question 1 was 16 percentage points higher in the group which received the short version from the absentee ballot.

The researchers could not determine for certain what caused voters to be less supportive of the long version of Question 1, but they hypothesized that it may have been a negative response to the amount of information provided. The longer version might give more visibility to specific, objectionable content of the law, such as the strictness of the ratios, that would have reduced support for the proposition.

“It certainly makes sense,” Pecora said. “When there are more details provided it makes some people apprehensive to be in favor of it just because you can tell it might be a strict law.”

“Data can be unpredictable, but it doesn’t lie,” Pecora said. “We’re in an age right now where there is a lot of data under fire, like whether polling data is done correctly or whether it’s representative of a population. At the end of the day, people are more complicated than you expect.”

Between the groups which received versions of the questions with or without mention of nurses’ unions, the students were not able to find any significant differences in responses. They theorized that nurses’ unions, and unions generally, may not be a term that sharply polarizes everyday voters.

The researchers also asked participants whether they knew a nurse or a union member personally. They found that participants who knew nurses or union members were slightly more inclined to vote ‘Yes’ on Question 1, but the difference was not significant enough to exclude the possibility that it resulted from chance.

Beyond the specific results, the students learned a lot from the experience of designing their own study, gathering data and analyzing it themselves. “Data can be unpredictable, but it doesn’t lie,” Pecora said. “We’re in an age right now where there is a lot of data under fire, like whether polling data is done correctly or whether it’s representative of a population. At the end of the day, people are more complicated than you expect.”

This study was completed by students at the University of Massachusetts Amherst. The UMass Amherst Data Analytics And Computational Social Science (DACSS) program offers training for graduate and undergraduate students to learn to identify sources of evidence to use in decision-making, design original research, work with large datasets, develop reliable and ethical data management practices, interpret and visualize results of the analysis, and communicate about data and research to decision-makers and general audiences.

All students have the opportunity to conduct independent research. This is a modified summary of a student project.