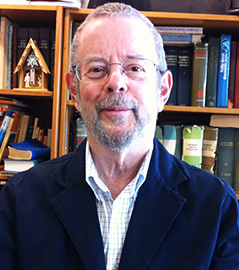 Department of Judaic and Near-Eastern Studies

Robert A. Rothstein was trained in linguistics by Noam Chomsky, Morris Halle, and Roman Jakobson, but also has a long-standing interest in folklore and popular culture. In addition to publications in the field of Slavic linguistics, his bibliography includes such titles as "The Poetics of Proverbs," "Yiddish Songs of Drunkenness," "The Popular Song in Wartime Russia," "The Girl He Left Behind: Women in East European Songs of Emigration," "Klezmer-loshn: The Language of Jewish Folk Musicians," "How It Was Sung in Odessa: At the Intersection of Russian and Yiddish Folk Culture," “From the Folk Ballad to the Cruel Romance,” and "Songs of Women Warriors and Women Who Waited."

Since 2004 Professor Rothstein has contributed a regular column on Polish language, literature and folklore to the Boston biweekly Bialy Orzel/White Eagle. A selection of these columns was published as Two Words to the Wise:Reflections on Polish Language, Literature, and Culture (Slavica Publishers, 2008). A second collection, entitled More Words to the Wise: Further Reflections on Polish Language, Literature and Culture, was published by Slavica in 2016. He was co-translator and co-editor of Jewish Instrumental Folk Music: The Collections and Writings of Moshe Beregovski (Syracuse University Press, 2001). His articles have appeared in Slavic Review, Slavic and East European Journal, International Journal of Slavic Linguistics and Poetics, Folia Slavica, Musica Judaica, Język Polski, Poradnik Językowy, Slovenský národopis, Slovenská reč, New York Folklore, Harvard Ukrainian Studies, YIVO-bleter, Slavica Tarnopolensia and The Polish Review.

At UMass prior to his retirement in 2017, he directed the Program in Slavic, East European and Eurasian Studies, he taught Polish, Russian, Yiddish, Belarusian, and Slovak, as well as courses in folklore, linguistics, and Yiddish literature and culture. He had a joint appointment in the Department of Judaic & Near Eastern Studies and adjunct appointments in the Department of Linguistics and in the Program in German and Scandinavian Studies.

In 2006 Professor Rothstein was appointed the Walter Raleigh Amesbury, Jr., and Cecile Dudley Amesbury Professor of Polish Language, Literature, and Culture. In 2013 he was awarded the Officer’s Cross of the Order of Merit of the Polish Republic in recognition of work of more than four decades in supporting and promoting Polish culture.

Department of Judaic and Near-Eastern Studies