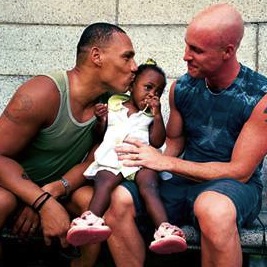 Dr. Rachel Farr, research assistant professor of psychology (and former postdoc with the Rudd Program), has actively contributed to new knowledge about the psychology of adoption through her Contemporary Adoptive Families Study (CAFS), a large study of adoptive families from across the United States, headed by lesbian, gay, and heterosexual parenting couples, all of whom had completed domestic infant adoptions. The study has examined the ways in which parental sexual orientation impacts child outcomes, parenting, and family dynamics in adoptive families with young children in Wave 1 of data collection. Wave 2 data collection is currently ongoing, now that children are in middle childhood (on average, eight years of age). In addition to continuing to examine the impact of family structure over time, in this second wave of the study, we are also investigating adoption-related dynamics, such as children’s understanding of adoption, how families talk about adoption, contact with birth families, and transracial adoption dynamics as related to child, parent, and family outcomes.

Data collection for Wave 2 of CAFS is continuing during 2014. During visits to participating families’ homes, children and parents are interviewed, both complete a series of online questionnaires, and families participate in two videotaped interaction tasks. Children’s teachers also provide data for Wave 2. Several other directions of analyzing data from Wave 2 include graduate student research projects about how lesbian and gay parents socialize their children around issues of family diversity and their own family structure and about how adoptive parents in transracial adoptive families engage in practices of racial and cultural socialization with their children.