Awards for Outstanding Poster Presentation and Lifetime Achievement were given out during the virtual ceremony hosted on July 16.

Susan Cox was selected for the Lifetime Achievement Award for Excellence in Adoption Policy and Advocacy award.

See the full award descriptions below.

2020 Awards
The Rudd Adoption Research Program at UMass Amherst had planned a conference for April 17, 2020, on the topic “Adult Adoptees: Connections Across Generations.” Dr. Hollee McGinnis from Virginia Commonwealth University served as Program Chair, and, working with the UMass team, had developed an outstanding program on this important, yet under-explored topic. We had planned to present awards for Outstanding Poster Presentation and Lifetime Achievement during the conference. Posters were evaluated without identifying information by several Rudd affiliated faculty, and it was decided that since two posters were equally deserving, we would give two awards.
Unfortunately, COVID-19 intervened and the conference had to be cancelled. (However, plans are underway to deliver the content in new and innovative ways over the course of the coming year.)
In order to honor our award winners since we could not come together in person, we conducted a virtual awards ceremony on July 16, 2020, highlighting the work of the three recipients. Information about each of the winners and their work follows. We are very pleased to have the opportunity to recognize their work and their careers. 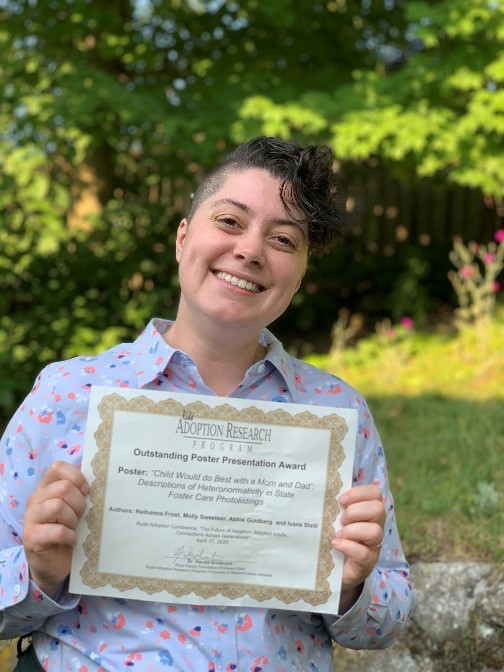 Reihonna Frost-Calhoun
Reihonna Frost-Calhoun is a rising sixth-year doctoral student – getting ready to defend her dissertation proposal very soon -- in Clinical Psychology at Clark University. Reihonna’s research interest focuses on families impacted by foster care and adoption. She was one of the participants in the 2017 Rudd Summer Adoption Research Institute. Her advisor is Dr. Abbie Goldberg, a co-author on the poster, along with Molly Sweetser and Ivana Staiti, from the School of Social Work at Smith College. We are honored to present the Outstanding Poster Presentation Award to Reihonna Frost-Calhoun and her colleagues for their poster, “ ‘Child Would do Best with a Mom and Dad:’ Descriptions of Heteronormativity in State Foster Care Photolistings.” Here is an overview:
This study found heterosexist and gender bias in the descriptions of ideal families in a common type of foster care adoption recruitment—the photolisting. Across multiple states, heterosexual (mom and dad) families were described as the best fit for a child more often than same-sex couples (two moms or two dads) or single parents. There was also a clear preference for families that included at least one female parent, compared to single dad families or two dad families. This may be a barrier for recruiting diverse types of families. 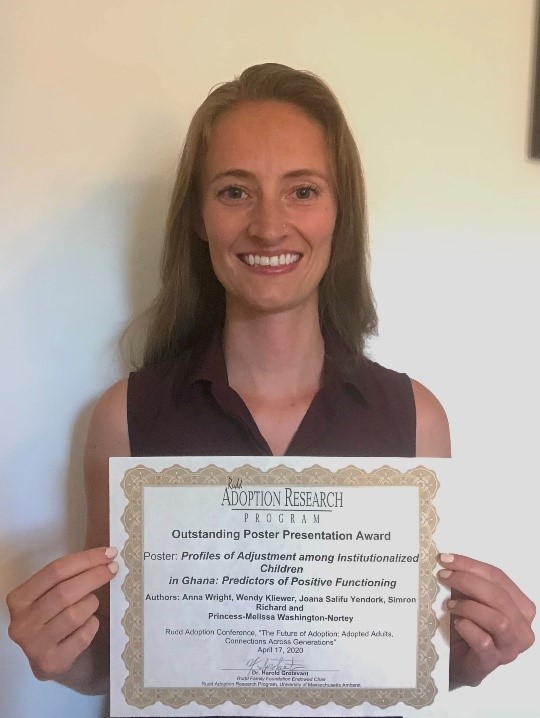 Anna Wright
Anna (Annie) Wright recently completed her Ph.D. in Clinical Psychology at Virginia Commonwealth University and will be joining the Rudd Adoption Research Program at UMass Amherst in September as a postdoctoral research scholar. She was one of the participants in the 2017 Rudd Summer Adoption Research Institute.  Her advisor at Virginia Commonwealth was Dr. Wendy Kliewer, a co-author on the poster, along with Joana Salifu Yendork, Simron Richard, and Princess-Melissa Washington-Nortey. We are honored to present the Outstanding Poster Presentation award to Anna Wright and her colleagues for their poster, “Profiles of Adjustment among Institutionalized Children in Ghana: Predictors of Positive Functioning.” Here is an overview:
Worldwide, there are 132 million orphans – children who have lost one or both parents. An estimated 2 to 8 million children globally live in institutional care for a large portion of their developmentally influential years. Placement in institutional care often leads to physical, mental, social, and emotional developmental delays and setbacks. Despite extensive literature documenting the deficits and delays in children raised in institutional care, there is a dearth of literature evaluating positive adjustment outcomes among these children. Recent studies have begun investigating predictors of positive adjustment for children residing in institutional care, as well as interventions that may prove to be beneficial for this population. This work is important given that the problem of eliminating institutional care and providing decent, stable, family-based care for all children globally has not been solved. The present study used cluster analyses to identify patterns of adjustment demonstrated by 100 youth ages 7-17 in institutional care as well as 100 of their peers from two-parent households in Accra, Ghana. Four distinct patterns were present for the children in institutional care, while three similar patterns were present for the children in families, across anxiety, depression, educational attainment, and perception of overall quality of life. Youth may struggle in one area while still functioning within the typical range in another. Significant promotive factors (social support, emotion regulation, self-efficacy, and coping strategies) were present for both groups, though promotive factors differed by group. This study is one step among many in the efforts to understand youth outcomes in alternative care settings, and to inform how best to meet children’s needs when institutional care is the only option. 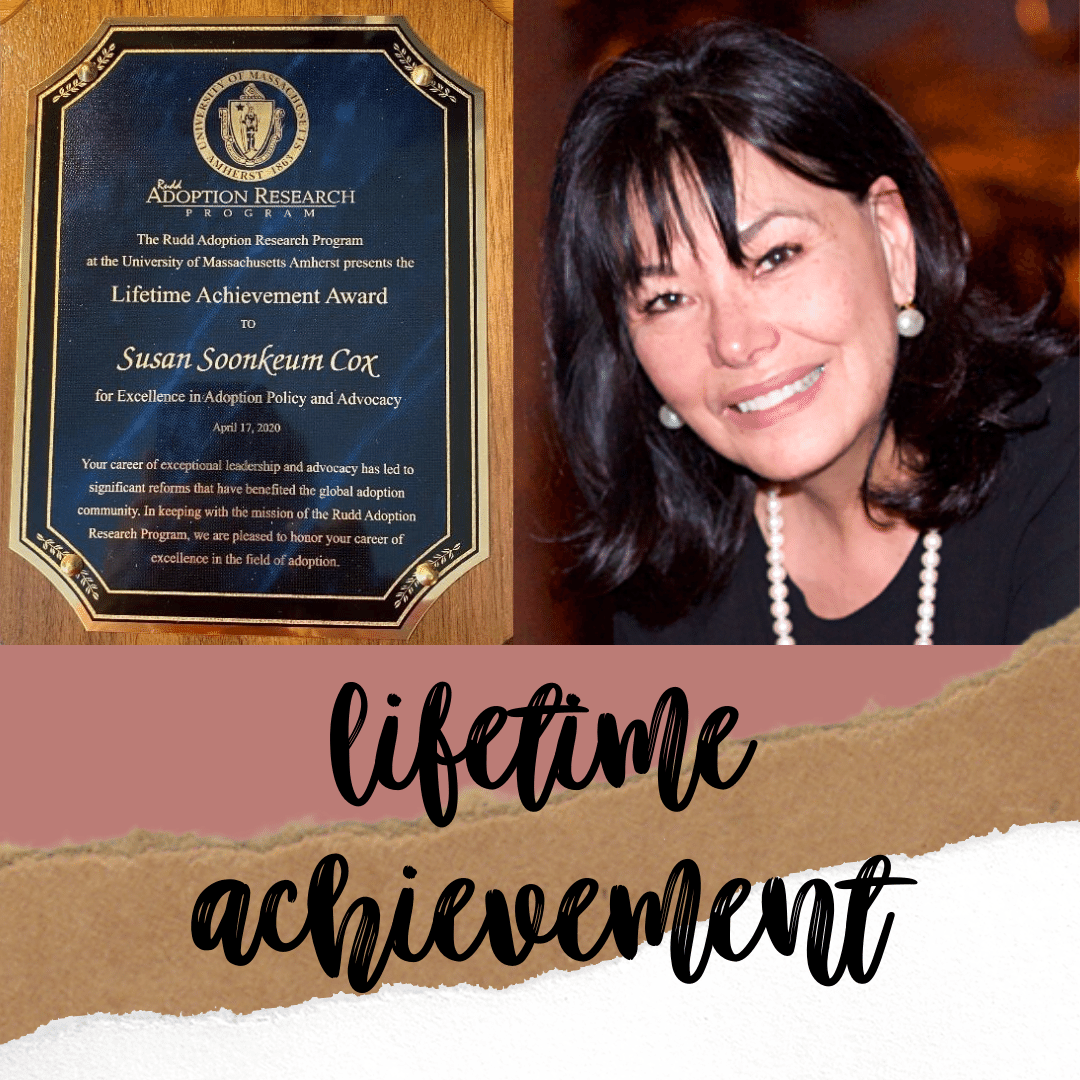 Susan Soonkeum Cox
It is our distinct honor to present our Lifetime Achievement Award for Excellence in Adoption Policy and Advocacy to Susan Soonkeum Cox.  Susan is Vice President for Policy and External Affairs at Holt International, based in Portland Oregon. Adopted from Korea in 1956, her life experience as an early international adoptee has given her a unique personal and professional perspective, as we can see from some of her activities and honors. For example, Susan was appointed to the first White House Commission on Asian and Pacific Islanders and, importantly, served as a member of the Hague Special Commission on Intercountry Adoption. During the 1988 Olympics in Korea, Susan was appointed by the Korean government as the spokesperson for Korean Adoption; was invited as a special guest to attend the 60th Anniversary of Korea; and in 2002 was appointed as Honorary Citizen of Seoul by then Mayor, Lee Myung Bak. In 1999 Susan was the founder of the International Gathering for Korean Adoptees in Washington D.C.; these Gatherings continue to be important opportunities for Korean adoptees to connect to this day. In 2013 she was appointed by the Republic of South Korea to serve as Honorary Consul for the state of Oregon. Earlier this year, she was honored with the Prime Minister's Citation, from the Prime Minister of South Korea, for her career-long work on behalf of children.  Throughout her career, her perspectives have been influential in the media as well as in the US Congress.
We honor Susan with a plaque, which reads as follows:
“The Rudd Adoption Research Program at the University of Massachusetts Amherst presents the Lifetime Achievement Award to Susan Soonkeum Cox for Excellence in Adoption Policy and Advocacy, April 17, 2020. Your career of exceptional leadership and advocacy has led to significant reforms that have benefited the global adoption community. In keeping with the mission of the Rudd Adoption Research Program, we are pleased to honor your career of excellence in the field of adoption.”