Carol Kalafatic (Quechua, Spanish & Croatian) is a Resistance Studies Fellow with the Resistance Studies Initiative at UMass Amherst and has been working with Indigenous Peoples (IPs) since 1991, as an organizer, workshop provider, trans-disciplinary scholar, and policy advocate for IPs’ self-determination and food sovereignty. She serves on the Trustee Board of the Forest Peoples’ Programme, and as Board Vice Chair of the AJ Muste Institute.

She was lead author of the framework for the UN Food and Agriculture Organization (FAO) Policy on Indigenous and Tribal Peoples, and re-wrote FAO’s Environmental and Social Standards to include IPs’ priorities. She has been a consultant to several organizations and IPs’ traditional governments, and served as: Vice Chair of the UN Committee on World Food Security - High Level Panel of Experts on Food Security and Nutrition; Founding Coordinator of International Indian Treaty Council’s Right to Food Program, and Indigenous Focal Point of the International Planning Committee for Food Sovereignty – an autonomous, global platform of small-scale food producers, rural workers organizations, and grassroots/community-based social movements advancing food sovereignty globally and regionally. 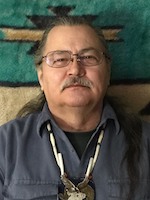 He is an active leader in his community and has served on Cook Inlet Tribal Council, the US Department of Justice Tribal Justice Advisory Group, and as member of the Sovereignty Network, United Tribes of Alaska, and the International Environmental Network. He co-founded the Arctic Athabaskan Council (one of six Indigenous entities that are Permanent Participants at the Arctic Council), and served as Chair of the Indigenous Peoples' Secretariat at the Arctic Council.

Abstract: Globally, many Indigenous Peoples’ food sovereignty initiatives focus on the revitalization of their traditional food systems. Several initiatives include the protection of fish and their habitats against over-fishing, environmental degradation, and the climate crisis. This seminar will discuss some Alaska Native (especially Ahtna Athabascan) initiatives to protect wild salmon as a culturally important being who also happens to be a biological keystone species. It will also summarize the on-going social and political challenges that Alaska Native Peoples face in asserting their self-determination within their territories — where salmon find some of their last remaining pristine habitats.

Free and open to all
Pre-registration required for participation