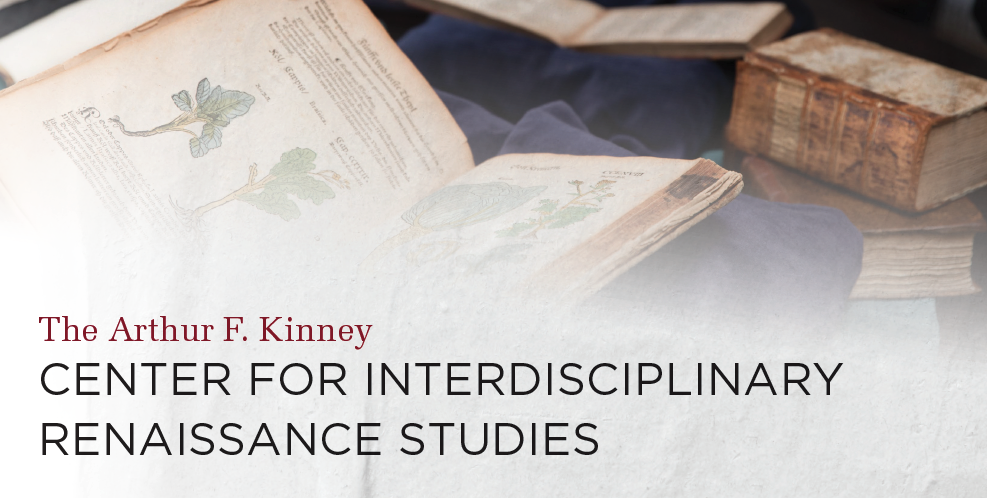 The History of the Book

The Center’s collection of books from the hand-press period contains a diverse range of bindings, type, illustrations, and marginalia. The Center also possesses many materials on bibliography and book collections. Our Stansbury printing press is available for lessons and demonstrations, allowing visitors to learn how to set type by hand.

The Center's collection of early books on the subject of botany and gardening is ever-expanding, supporting the research necessary to maintain critical scholarly research and the Center's sixteenth-century Kitchen Garden. One of our finer books on botany is a 1633 copy of Gerarde’s Herball. The Herball was an immensely informative and popular work, each page containing detailed descriptions and illustrations of plants. In a similar vein is Adam Lonicer’s Kreuterbuch (1564). In addition to the pages on plants, it also covers animals, minerals, and distilling. Each of the numerous illustrations is hand-colored.

Our collection of early modern English theater includes editions and criticism of Shakespeare as well as his contemporaries, including Christopher Marlowe, Thomas Dekker, Ben Jonson, and Philip Massinger. Our rare holdings include a 1690 folio of The Works of Ben Jonson, Fifty Tragedies and Comedies by Beaumont and Fletcher from 1690, and a 1656 quarto edition of The Old Law, or A New Way to Please You, a tragicomedy attributed to Thomas Middleton, William Rowley, and Philip Massinger on the book's title page.

The Center holds eight different editions of Sir Philip Sidney’s the Countess of Pembroke’s Arcadia. Other major works of literature include Edmund Spenser’s epic poem The Faerie Queene (copies from 1609 and 1611), and Sir John Harrington’s translation of Orlando Furioso (1634).

The Renaissance produced many humanist thinkers and scholars who studied the teachings and philosophies of classical scholars. The most famous of these was Erasmus of Rotterdam whose extensive knowledge was influential for centuries. He was widely published and the Center has collected many copies of his works, including his Adages, The Encomium for Thomas More, and his instructions on letter writing. The Center also holds a 1573 copy of Thomas More’s Dialogue of Comfort Against Tribulation.

Notable amongst the Center’s collection of classics is a 1503 copy of the works of Euripides in Greek, and a 1515 copy of Ovid in Latin. Each of these volumes was published by the Aldine Press in Venice, best known for popularizing the italic font and the more portable octavo format. The Center has several other copies of Ovid, most notably a 1632 copy of George Sandys’s famous translation of the Metamorphosis.

The Center maintains an extensive collection of books pertaining to European armor, weapons, and their use. In addition, it is home to the Raymond J. Lord Collection of Historical Combat Treatises: a digital archive of historical combat treatises and fencing manuals dating primarily from the Renaissance. The collection contains over thirty digitized combat manuals, dating from the early-sixteenth century to the mid-seventeenth century and spanning most of western Europe.

Many works of the Spanish Golden Age are housed at the Center. These include the writings of Cervantes, Lope de Vega, Tirso de Molina, Francisco Quevedo, and Pedro Calderón de la Barca. Our most prized item is a 1633 copy of Todas las obras de don Lvis de Gongora en varios poemas, the complete works of Luis de Gongóra. Gongóra was one of the most famous Spanish poets of all time.

Our collection of works on art history contains over two hundred and fifty volumes, with a particular focus on Italian art. Some of the collection deals with the complete works of famous artists of the period, while other texts are devoted to artistic practices such as architecture, engraving, altarpieces, and illumination.

The collection of Professor Arthur F. Kinney, the Center's founder and director, is the cornerstone of our library. His collection includes over 12,000 manuscripts, rare books, maps, facsimiles, monographs, and editions, mostly related to English Renaissance political and social history, literature, religion, music, and art.

Samuel Schoenbaum (1927-1996) was one of the foremost Shakespearean scholars of the 20th century. His numerous seminal publications include Internal Evidence and Elizabethan Dramatic Authorship (1966), Shakespeare's Lives (1970), and Shakespeare: A Documentary Life (1974). The collection consists of many of Schoenbaum's books, in addition to several handsome 19th editions of English Renaissance dramatists.

Harold Garrett-Goodyear, author of The Later Middle Ages and Professor Emeritus of History at Mount Holyoke College has donated over 2,000 monographs dealing with the subjects of medieval and early modern history, women, spirituality, and power; medieval conflicts and boundaries; law and justice.

Professor O.B. Hardison, Jr. (1929-1990), who taught at Georgetown University and directed the Folger Shakespeare Library from 1969-1983, was an eminent scholar of Renaissance studies. The collection focuses upon Renaissance poetry and poetics, including Renaissance editions of Italian works.

The William A. Ringler, Jr. Collection

William A. Ringler, Jr. (1912-1987), editor of the Clarendon Press Poems of Sir Philip Sidney (1962), was also known for his important bibliographic work, including the Bibliography and Index of English Verse, 1476-1558 (published posthumously by Stephen May). The collection contains rare books and first editions, and 1500 secondary volumes, with a special emphasis on Tudor history and the life and work of Sir Philip Sidney.

Robert Hoopes (1920-2008), who served an instrumental role as the first Dean of Faculty at Oakland University (Michigan), completed his career as an English professor at UMass Amherst (1970-90). He published much work on English Renaissance literature and culture. The collection focuses on English intellectual history of the Sixteenth and Seventeenth-Centuries, with an especial concentration on Milton and Seventeenth-Century poetry.

The Carol and Robert Kaske Collection

Robert Kaske (1921-1989), and Carol Kaske both taught at Cornell. Robert wrote the book Medieval Christian Literacy Imagery: A Guide to Interpretation and served on the editorial and advisory boards of several prominent journals and as editor-in-chief of Traditio. Carol, a noted Spenserain, has published Marsilio Ficino, Three Books on Life, a Criminal Edition and Translation with Introduction and Notes (1989), Spenser and Biblical Poetics (1999); and Edmund Spenser: "The Faerie Queene" Book I, (2006). Their donation consists of over 150 rare books and 6500 monographs, covering the subject areas of Spencer, Neo-Platonism, Italian literature, philosophy, theology, and medieval literature and history.

Dan S. Collins was a co-founder of the journal English Literary Renaissance (with Arthur F. Kinney). An annual lecture is given at the Center every spring in his name. The collection contains works on the prose and poetry of the Seventeenth-Century.

Gwynne Blakemore Evans (1913-2006) was a Shakespearean who taught at Harvard University and was editor of the Riverside Shakespeare (first pub. 1974). He also wrote books on William Cartwright and Robert Parry. The collection consists entirely of rare books from Evans's personal library.

Clare Murphy (1933-2013) was a specialist of Thomas More and early Tudor humanism, Erasmus, John Fisher, and John Colet. She was the editor for the journal Moreana, an adjunct scholar at the Arizona Center for Medieval and Renaissance studies, and co-organized conferences on Thomas More in Ireland, France, Argentina, and Amherst, Massachusetts. Her collection includes her library of works dealing with religious studies and the Reformation.

Virginia Scott assisted in founding the theater department at UMass-Amherst. She was a scholar of Molière, publishing in 2000 the first English language biography of the playwright to appear in over seventy years, and other French theater. The collection includes her library of scholarly books and her academic papers on Molière and the theater of France and Spain.

Gerald Snare taught at Tulane University wrote The Mystification of George Chapman (Duke, 1989). The collection consists of books of prose and poetry from the Sixteenth and Seventeenth-Centuries, with an especial focus on Spenser.

Curator of Italian Paintings at the National Gallery of Art, Washington, David Allen Brown is a world-renowned scholar of Renaissance Italian art. His donations have given the Renaissance Center an extensive collection of books on Italian art.

This collection consists of books, photostats, microfilms, and editorial correspondence concerning the edition of the Works of St. Thomas More published by Yale (15 volumes, published from 1963-1997). Richard S. Sylvester—one of the chief editors in the project—owned most of the books in the collection, many of which contain his handwritten marginalia.

Dame Helen Gardner (1908-1986) was one of the twentieth century's preeminent Donne scholars, producing editions of the poet's Divine Poems (1952) and Elegies and Songs and Sonnets(1965). She also published work on T.S. Eliot, Milton, and Shakespeare. She was widely admired all over the world as an excellent lecturer. The Center's Gardner Collection includes all of the working notes for her editions of Donne and Eliot, professional correspondence, and lectures on Shakespeare and Renaissance English drama.

Harriet Hawkins (1934-1995), longtime professor of English literature at Vassar College, was an influential critic of English Renaissance poetry and drama. Some of her research interests included Shakespeare, poetics, literary taboo, and chaos theory. The Center's collection includes all of Hawkins's correspondence, lectures, essays, reviews, and some personal papers.

Professor J.H. “Jack” Hexter (1910-1996), a historian who taught at Washington University and Yale, published important work on St. Thomas More, Machiavelli, and English Renaissance historiography. Hexter is well known for his categorical distinction between the “lumpers” and the “splitters.” At the time of his death, he was working on an ambitious “History of Modern Freedom.” This collection consists of Hexter's working library, which contains many annotated volumes.

The Raymond J. Lord Collection is a digital archive of historical combat treatises and fencing manuals dating primarily from the Renaissance. The collection contains over 30 digitized combat manuals, dating from the early Sixteenth-Century to the mid-Seventeenth-Century and spanning most of Western Europe.

The Alan and Rosalie Soons Library of Hispanic Studies

Professor Emeritus Alan Soons (1925-2011), formerly of the Department of Romance Languages at UMass Amherst, published numerous articles and editions related to Golden Age Spain throughout his long career. The collection contains over 2,000 items on Golden Age Spain, French and Italian literature, and culture.

In addition to the Alan Soons Collection, books donated by Professor Emeritus Irving P. Rothberg (UMass-Romance Languages) create a large and rich collection of materials related to early modern Spanish history, literature, and culture. The collection contains over 1,000 secondary sources in the Spanish literature of the Golden Age.

Professor Roy Flannagan, of the English Department at the University of Ohio, has published numerous books and articles on John Milton, in addition to editing the Riverside Milton. The collection contains more than 1,500 resources (mainly scholarly monographs) in the literature and culture of the Sixteenth and Seventeenth-Centuries, with a special focus on John Milton.

Professor Roland Mushat Frye (1922-2005), an eminent scholar in Miltonic and theological studies, taught at Emory University and the University of Pennsylvania. He published hundreds of scholarly articles and books, including Milton's Imagery and the Visual Arts and Shakespeare and Christian Doctrine. The collection contains all of Frye's working papers and notes.

Professor Robert S. Kinsman (1919-2006) taught English literature at UCLA for over 40 years. He published important work on the poems of John Skelton, including John Skelton: Canon and Census (1967). Kinsman's research interests also included the works of James Joyce. The collection contains Kinsman's working papers, including those related to his unfinished Complete Works of Skelton.

Marvin Rosenberg (1912-2003) taught at U.C. Berkley and his work focused on the documentation of Shakespeare stage production. His collection includes working papers from his scholarship, notes, programs, and Rosenberg's novel and prize-winning play manuscripts.