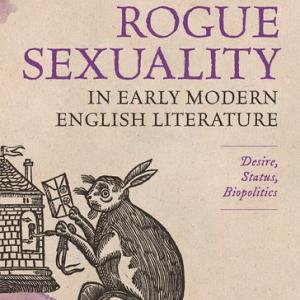 This book launch will be held online via Zoom Webinar. Please register here.

The "rogue," a term that described criminals, prostitutes, vagrants, beggars, and the unemployed, dominated the pages of early modern popular crime literature. Rogue Sexuality resituates the rogue by focusing on how their menace--and their seductive appeal--emerged not only from their social marginality, but also from their supposedly excessive sexuality and prodigious sexual reproduction.

Through discussions of both familiar and little-studied early modern works by William Shakespeare, John Milton, Ben Jonson, Thomas Middleton, Thomas Dekker, Robert Greene, Thomas Harman, and the inventor of modern demography John Graunt, this volume posits the sexualized rogue as the avatar of a new category of "socio-sexual identity" and traces a surprising social transposition, in which socio-political elites are portrayed as appropriating the rogue's sexual vitality and performative charisma to navigate moments of crisis. By tracking the movement of rogue sexuality from a criminal to a normative discursive register, this book challenges the distinctions that literary critics and historians tend to draw between orderly and disorderly sexuality.

With its focus on reproduction, rogue sexuality also provides a new framework for what Michel Foucault called "biopolitics," the state's focus on exercising power over life. In legal, administrative, and scientific documents, this book shows that early modern writers grappled with popular pamphlets' rendering of the alleged threat of rogue reproduction. Rogue Sexuality thus offers a new approach to the political history of early modern England as a population--as a people whose aggregate sexual life and reproduction were a key part of its political imagination.

This book launch will be held online via Zoom Webinar. Please register here.