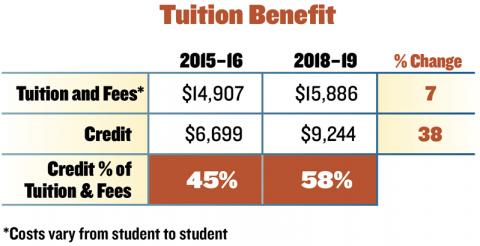 When your spouse or dependent attends UMass, how much of a tuition benefit do they receive? As I’ve learned during my daughter’s four years as a UMass Amherst undergraduate, the answer is complex, confusing, and changeable.

Since before the PSU began representing professional staff in 1989, there was a long contractual history of UMass waiving 100 percent of tuition for employees and family members. The original intent of the tuition benefit was to provide a nearly free UMass education for employees, spouses, and dependents.

Over the years, as state appropriations for education declined, UMass shifted much of the cost of education into mandatory fees and kept tuition artificially low. As a result, the 100 percent tuition waiver covered less and less of the cost of attendance. PSU worked with many other UMass unions to address the decline of the tuition benefit, first negotiating for a freeze on fees for employees, spouses, and dependents and later, in the 2014–2017 collective bargaining agreement, agreeing to a waiver of 50 percent of fees for family members. In 2015–16, my daughter’s first year at UMass, her tuition was $1,714, while fees had escalated to $13,193. She received a credit for full tuition and 50 percent of the “curriculum fee,” for a total credit of $6,699.

Beginning in academic 2016–17, the Massachusetts legislature allowed UMass to retain in-state tuition. As a result, the university’s billing structure changed: my daughter’s tuition for her sophomore 2016–17 academic year was $14,590; fees were $380. She received a 50 percent tuition credit of $7,295.

In 2016, PSU filed a grievance alleging that UMass has violated our contract in failing to waive 100 percent of tuition for our spouses and dependents. UMass denied the grievance and the matter went to arbitration. Unfortunately, despite the best efforts of leadership and our attorney, PSU lost the arbitration in 2018. However, employees did gain some ground: while my daughter’s tuition increased to $15,406 for the 2018–19 academic year and fees rose to $480, the credit for spouses and dependents was increased from 50 percent to 60 percent, resulting in a tuition credit of $9,244 for her senior year.

* Costs vary from student to student