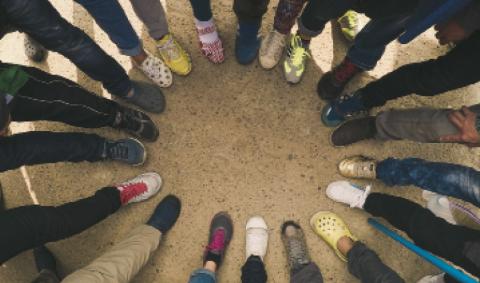 Several members of PSU Amherst’s Committee on Racial Equity (CORE) met with UMass Police Chief Tyrone Parham in December to open a dialogue focusing on community member incident reporting and police response. Prompting the conversation were rising concerns from PSU members about the increasing number of racially motivated incidents reported to UMPD and the direct impact on our members. Parham affirms, “UMPD values community input as we embrace a diverse and inclusive environment. Without input like the perspectives shared by PSU members, we’d be missing the mark.”
The December dialogue centered on the use and impact of the UMPD confidential tips line. Parham shared with CORE members the context and importance of such a method of reporting, citing its use in drug- related crimes as well as the potential to reduce fear of retaliation for contacting the police. CORE members shared with Parham concerns about potential negative impacts associated with use of confidential tips lines. For example, implicit or explicit bias may be a motivating factor for a caller, thereby leaving information anonymously does not provide the opportunity for officers to explore the nature of the concern or investigate the validity of the information.

The robust discussion brought compromise and a promising way to simultaneously uphold safety and inclusion for all members of the campus community. Parham agreed to changing the UMPD website as well as modifying the tips line voicemail message. Shortly after our meeting, the main banner on the UMPD homepage, which lists two methods of community reporting, was revised to include “Emergencies” or “Non-Emergency: 413-545-2121.” Previous to the change, the second option was titled “See Something? Say Something,” with reporting options limited to either the tips line or anonymous witness form (not including the 545-2121 non-emergency line option). The See Something phrase is part of a larger national initiative associated primarily with terrorist activity, and furthermore does not provide a clear context or definition for exactly what “suspicious” acts or behaviors community members should report. While the confidential tips line remains a method for UMPD to gather information from community members, it is no longer listed as the primary way to report non-emergency concerns. Recent changes to the tips line voice message emphasize UMPD’s community partnership in addressing matters of safety and security on campus. Callers are made aware that the line is not regularly monitored, producing undetermined response times, and thereby are provided a more comprehensive explanation of reporting options based upon the nature of their call. Callers are invited to contact dispatch in matters that do not necessitate remaining anonymous or that require more urgent police response, and subsequently asked to leave contact information for less urgent matters.

UMass is not the only institution of higher education to grapple with issues of hate proliferating on campuses. Over the past few years, university leaders have been challenged to demonstrate an improved capacity to actively engage with their community members around acts of injustice or hate. Just last semester, Chancellor Kumble R. Subbaswamy issued at least four messages directly in response to instances of racial, anti-Semitic, homophobic, and transphobic incidents on campus, and called for our community to unite against acts of hate. Like our chancellor, we too have a responsibility in these difficult times to go beyond the passive or simply reactive; rather, we must join the effort to actively engage in building and sustaining an inclusive community shaped and defined by dignity and respect. Our recent meeting demonstrated that both Parham and members of PSU Amherst’s CORE share an interest in collaboration, trust, and positive working relationships. It is the hope of CORE and UMPD to dialogue and cultivate our partnership so that we may continually address and respond to our community members, and foster an inclusive campus climate.

CORE is building PSU’s capacity to address racial discrimination and inequality at both the Amherst and Boston campuses using contract language, research, and education.