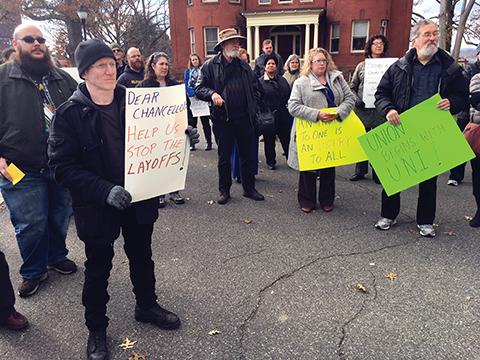 PSU at UMass Amherst has formed the Committee on Racial Equity (CORE) with its first goal addressing the results of the November 2016 Campus Climate Survey on inclusivity, experiences in classrooms and workplaces, and administrative responses to complaints of unfair treatment. PSU CORE at UMass Boston, operating since December 2013, is focused on racial discrimination and inequality using contract language, research, and education to bring change.

At the Amherst campus, the new committee is mapping out plans for addressing and dismantling racism on campus. For example, the committee hopes to start a book discussion group to inspire dialogue on bigotry and its ill effects. “Getting people to talk about race and racism is one of the first barriers to overcome to address racism issues. If people are afraid to talk about it, problems can’t be named and solved,” says Jennifer Page, a founding member of the Amherst CORE.

Amherst CORE meetings are held every other Monday from noon to 1 p.m. The next meeting will be March 26. For more information and the meeting location, email risa@schoolph.umass.edu.

At the Boston campus, CORE has looked at PSU staff salaries for race and gender inequities and learned from the Office of Diversity & Inclusion and others what resources are available for targets of racism. They have also worked on raising awareness on ways PSU members of color experience racism by developing educational theater for presentation to the broader community.

A report on the results of the Amherst Campus Climate Survey,  released in January, can be reviewed at  umass.edu/diversity/campus-climate.