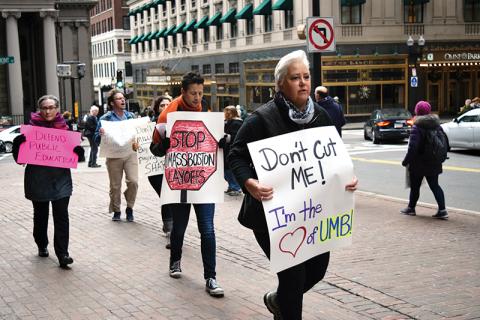 One-third of the way through UMass Boston’s 25-Year Master Plan, the campus continues to evolve on a daily basis. By the end of 2018, the number of buildings on campus will have doubled since 2009, including two residence halls and a parking garage. Enrollment continues to slowly rise. Yet as the master plan is coming to life, the university’s administration came to the conclusion that centuries worth of worker experience will play no part in the campus’s next act.

In the week before Thanksgiving, UMass Boston delivered the devastating news of staff layoffs. The ongoing budgetary deficit was the main reason cited for the elimination of 21 professional jobs, or three percent of the PSU workforce. Nineteen of the 21 are women. The employees had accumulated more than 433 years of experience. Sixty-one percent of the PSU members laid off had at least 15 years of service at UMass Boston; six of them—five women—had more than 30 years of dedication to the Boston campus. By comparison, only 31 percent of PSU members have attained such seniority, indicating that senior staff had been targeted for elimination. Their last day of employment was February 13.

PSU had been mobilizing for months in attempts to thwart the layoffs and expose the roots of the budget crisis. Informational meetings were held to keep members updated, while officers made sure management followed the contract regarding lost jobs.

Tom Goodkind, president of the UMass Boston PSU, had for months been decrying at trustee meetings and protest rallies the hypocrisy of trustees criticizing the proliferating debt, while approving decisions that led to the budget deficit.

The layoff was a surprise to Peggy Roldan Patel, who worked as director of graduate admissions for many of her 25 years and was instrumental in the increase of graduate students. “We had assurances that our jobs were safe and that our department was safe,” she said. The bond created between Roldan Patel and her office family made the termination even more difficult.  “I feel like a dying mother who needs to find someone to care for her children,” she said. Roldan Patel found the layoff to be an emotional rollercoaster. She says she had a great team of union colleagues who supported her throughout the ordeal—in-person, on the phone, and via email.

Barbara Graceffa, another key employee who was the director of marketing and communications for the McCormack Graduate School of Policy and Global Studies, thought she was heading into a work meeting the day her life turned upside down. She had dedicated 35 years to UMass Boston and was three years from collecting her full pension. Graceffa said, “The union was very supportive. They helped me weigh my options and informed me of my bumping rights.” In the end, Graceffa took the layoff rather than bump someone in her department. “That was something I could not do,” she said.

For many employees, UMass Boston had become more than a workplace. For Roldan Patel, “My daughter grew up here. When I first arrived, my intention was to stay until something better came along and 25 years later it became my family.  We had three weddings and five babies.”

Jon Hutton, a UMass Boston employee for 36 years who worked in enrollment marketing, now faces economic challenges of forced retirement. “It could be up to four months before I receive my first retirement check.  Yet I will have to pay my own health insurance during this time.”

Besides Graceffa and Hutton, four staff members who had devoted 30 or more years to UMass Boston have now lost their jobs in the layoffs. They are: Deborah Williams, 35.4; Sandra Bispham-Parkin, 33; Jill Griffin, 32; and Sonia Weir 30.5.