Goodbye and Thank You, Fatmata Jah 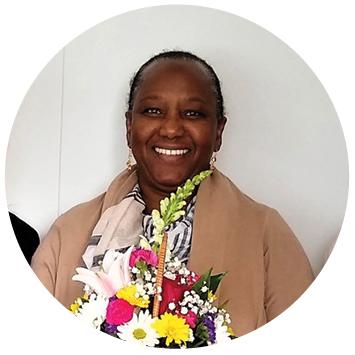 Fatmata Jah, a long-time PSU activist and the co-founder of PSU Boston’s Committee on Racial Equity (CORE), retired October 18. Jah came to the U.S. from Sierra Leone and started her studies at UMass Boston in 1993. She started working at UMB in 1998, first in the registrar’s office, then in graduate admissions, and for the past eight years in university advising. Through PSU, Jah became active with women’s labor organizations, including the Women’s Institute for Leadership Development and the Summer School for Union Women, where she learned public

Q: What brought you to the U.S., and what led you to working at UMass Boston, supporting students for the past 21 years?

Jah: I used to visit my brother who was in Boston College and realized that my ticket to freedom was to come to the U.S. to go to school. You see, I was denied access to higher education in Sierra Leone, not because my family could not afford it, but only because I was a woman. I had to get married, and when I was married, I didn’t have the freedom to do anything or make any decisions. I lived literally a block away from the university but I was still not allowed to attend. I used to walk around the University and try to find somebody to help me escape.  That’s where my obsession with higher education comes from.

I first went to school in New York, but New York was a little too far for me so I decided to come back to Massachusetts. At that time my brother was living in Harbor Point (right next to UMass Boston), so I went to UMass because it was in walking distance and I was afraid to walk around in the snow! I started school here in 1993 and I ended up making good friends, which is why I stayed. It was like a family environment where everybody was comfortable with each other and build a lot of long-term relationships. I’m still connected with people I met when I first came to UMass Boston. It’s very different now.

The war was going on in Sierra Leone and Liberia then and I had to help my family financially. It was really hard to be an adult student, working full time and going to school, and I did not get much support. That’s why I started helping students and how I got into Advising. I had almost finished my degree before I started working at UMB.  I have worked here for twenty-one years, first in the Registrar’s Office, then in Grad Admissions for the past eight years in University Advising.

Q: You have done a lot of work with PSU as an Area Representative and as one of the founders of our Committee on Racial Equity (CORE). How did you get involved?

Jah: I’ve always been one who has strived for a better life. I’m always looking for what’s next to do, or what I am going to learn in any situation or from anybody I come across. I went to a couple of PSU meetings and started asking questions and realized that the union was supporting people who felt intimidated or could not advocate for themselves. I have always advocated for every right for everyone—I got that from my Dad, who taught us to always be fair, no matter who or what circumstances we have to deal with. I got involved because I felt that the union was there to help the University be fair to everyone.

Q: Are there particular skills or knowledge that you have gained or improved because of your work with PSU?

Fatmata: Yes, public speaking! I always dreaded public speaking—I would get physically ill thinking about giving a public speech. If it wasn’t for the training I got from CORE and WILD (Women’s Institute for Leadership Development), it would have taken me much longer to learn the public speaking I have to use for my job in Advising.

Q: Would you recommend this to other people--getting involved in the union?

Jah: Yes! We have gained a lot because of the union: the sick leave bank, parental leave. And other PSU members should get involved because we are all in this together. There is strength in unity. We need to help each other grow, and by doing this we make our institution grow as well.

Q: Can you say why you thought it was and is important to have a group like the Committee on Racial Equity (CORE), which is led by PSU members of color and whose mission is to help PSU address racial inequities on the job?

Jah: It’s important to have a group like CORE because some people are afraid to confront issues on their own and CORE is a platform for them. We help them feel comfortable expressing their views or feelings about racism they have experienced at work, and comfortable working with PSU to address the racism. It’s good to have a place where you can have that kind of conversation or if you need somebody to advocate on your behalf.

Q: You have become active in labor groups focusing on women—WILD and UCLEA (the University and College Labor Association). What have you gained from those?

Jah: The most important lesson I gained from WILD and UCLEA is that our struggles are universal and that we can only succeed when we collaborate. I am very grateful for all the support and love I received from my union sisters; without them, I will not be where I am today. My professional growth has been mostly through these groups. I will use these experiences to help African women take the initiatives to help our countries.

Q: I want to ask you about the other parts of your life, beyond UMass, PSU, WILD and labor women. I know that you are a writer.

Jah: My dream is to be a successful writer, but I haven’t published anything so I am still an aspiring writer. Hopefully one day you will read more of my story! My goal is to use writing in the future to help women develop and attain the freedom they want.

I work with an amazing group of women writers called the “Streetfeet Women.” All but three of us have been published. We meet monthly to review each other’s work and serve as mentors to one another. We sometimes read our stories or perform a play at local public libraries. My goal is to use writing in the future to help women develop and attain the freedom they want.

Q: What’s next for you Fatmata, after retirement?

Jah: A whole lot is next! I am still going to continue with my writing as one of my major projects. Since family comes first, I’m going to see my mum in Sierra Leone, who I have not seen in six years. While I’m there I will revisit my fight against female circumcision--I grew up where it is still practiced on teenage girls. I may also re-open the library I set up there, which is now closed. I also intend to explore projects with my alma mater Holy Rosary Secondary School in Kenema.

I want to find a way to advocate for girls. There’s a lot of prostitution going on, only because the girls aren’t educated, don’t have jobs, aren’t independent enough. We need to help them. I want to give back by helping them believe in themselves and knowing that with education, you can do anything you want. I was able to free myself from a marriage I didn’t want to be in because I have the education to get a better life for myself. I want the girls to know that it’s possible. It can be done.

Q: Do you have any words of wisdom for PSU members who are staying on at UMB through yet another budget crisis?

Jah: I would say: don’t give up and don’t let current circumstances derail you from your goals and dreams, or change who you are. Acknowledging the humanity in everyone you meet  here helps a lot-- just smile and say hello! I suggest stepping out of your comfort zone and always have an alternative plan.

Q: Thank you for everything you have done for PSU and UMB, Fatmata! Anyone who has you believe in them is very lucky!