The University of Massachusetts Amherst
Aboutx 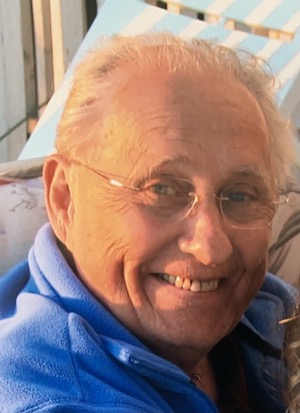 It is with great sadness that I report the death of our beloved colleague, Ed Gettier. Ed had been in failing health over the last few years. He died March 23 from complications caused by a fall. He was 93.

From 1957 to 1967 he taught at Wayne State University, first as Instructor, then Assistant Professor, then Associate Professor. In 1964-65 he held a Mellon Post Doctoral Fellowship at the University of Pittsburg. Bob Sleigh, who was a close colleague of Ed’s for his entire career, his written a personal reflection about their time at Wayne State here.

In 1967, Ed was hired at UMass Amherst. This was part of a major recruitment effort initiated by the recently hired Department Head Bruce Aune with the goal of building a first-rate PhD program. Other faculty recruited to UMass at around the same time include Bob Sleigh, Gary Matthews, Vere Chappell, and Fred Feldman. Ed was promoted to full professor in 1972, and remained at UMass for the rest of his career, retiring and becoming Professor Emeritus in 2001. I have added some personal reflections on my time as a colleague of Ed, from the time I arrived in 1990, here.

Ed published only two papers and one review throughout his career, all in the 1960s. (Maybe there is a third paper translated and published only in Spanish in some obscure Central American Journal, but I have not been able to find it.) Of course, it is for his three-page Analysis paper from 1963, “Is Justified True Belief Knowledge?, that he is widely acclaimed. With two brief counterexamples involving the characters Smith and Jones, one about a job and the other about a car, Ed convincingly refuted what was at that time considered the orthodox account of knowledge. And the responses by epistemologists over the years to what has become known as the “Gettier Problem” fill many volumes in our philosophy libraries.

Tributes to the influence of Gettier’s paper are numerous. David Lewis famously wrote:

Philosophical theories are never refuted conclusively. (Or hardly ever. Gödel and Gettier may have done it.) (Philosophical Papers, Volume 1, Preface)

Alvin Plantinga, who had been a colleague of Ed’s at Wayne State, wrote:

Knowledge is justified true belief: so we thought from time immemorial. Then God said, “Let Gettier be”; not quite all was light, perhaps, but at any rate we learned we had been standing in a dark corner. Edmund Gettier’s three-page paper is surely unique in contemporary philosophy in what we might call ‘significance ratio’: the ratio between the number of pages that have been written in response to it, and its own length; and the havoc he has wrought in contemporary epistemology has been entirely salutary. Never have so many learned so much from so few (pages). (Warrant and Proper Function, pp 31-2)

No one was more surprised by the response to his paper than Ed himself. Ed never engaged seriously with attempts to “solve” the Gettier problem, so far as I know, although he did present two papers on knowledge in 1970, one at Chapel Hill, the other at an APA symposium. After moving to UMass and teaching a few graduate seminars in the theory of knowledge, he devoted his philosophical energy to logic and semantics, especially modal logic and the semantics of propositional attitudes. And later in his career, he developed a serious interest in metaphysics, especially the metaphysics of modality. But Ed’s interests could not be confined to only a few areas. He was a lover of philosophical puzzles wherever he found them.

Although Ed published little, he was brimming with original ideas. And he was a careful critic of others’ views. He had a profound effect on the graduate students at UMass, both through his teaching and through serving on dissertation committees. Students whose dissertation he directed were (in chronological order): Delvin Ratzsch, Mark Richard, Thomas Ryckman, David Austin, Geoff Goddu, and Neil Feit. In 1988, a Festschrift was published to honor Ed’s sixtieth birthday with contributions by many former students and colleagues: Philosophical Analysis: A Defense by Example, edited by David Austin (Dodrecht: Kluwer). 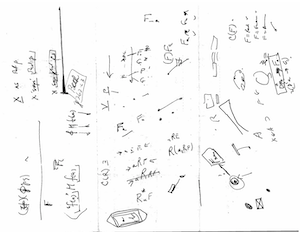 Ed’s influence was also felt outside the classroom, over food and coffee at the Hatch or the Newman Center. His modus operandi, when he wanted to work out a problem or explain a point to students, was to pull out a napkin and cover it with logical symbols. These philosophical ephemera were never meant to be saved, but for some reason one was (you can view a full-size version of this image here).

Ed was a wonderful colleague and teacher. He is sorely missed.