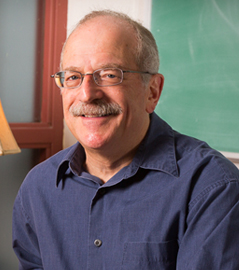 Joseph Levine is originally from Los Angeles, California, and received his BA in philosophy from UCLA in 1975.  He then did his graduate work in philosophy at Harvard University, receiving his Ph.D. in 1981.  After a one-year temporary position at the University of Illinois Urbana-Champaign, he held positions at Boston University, Bates College, North Carolina State University, and The Ohio State University before coming to UMass in 2006.

Professor Levine works primarily in philosophy of mind and psychology, but also works on topics in metaphysics and social/political philosophy.  In philosophy of mind his main focus is the problem of consciousness, how to understand the subjective experience of the world in relation to the objective characterization provided by scientific investigation, including the science of the mind.  With respect to cognitive science, his interests concern the problem of intentionality - what grounds claims of representational content in psychology - and the question of cognitive architecture, how mental capacities are organized.

Professor Levine’s work in metaphysics primarily revolves around modal questions, specifically as they arise in the context of the mind-body problem.  In particular, he has written extensively on the relation between conceivability and possibility.  Finally, while his interest in social/political philosophy is mostly restricted to teaching at the undergraduate level, he has written some on questions of nationalism and collective responsibility, with one piece appearing in the New York Times.  He plans to do further work on these issues in the future.