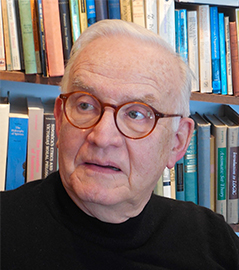 Bruce Aune was educated at UCLA and the University of Minnesota. In 1960 he began his teaching career at Oberlin College but soon was invited to join the new department of philosophy being formed at the University of Pittsburg. In 1966 he left Pitt for UMass, having been recruited by the Dean of Arts and Sciences to develop a highly ranked philosophy department for this university. He began appointing faculty that fall and eleven years later an outside team of distinguished philosophers appointed by the university administration judged the resulting department to be “among the top eight or nine” in the country.” Aune resigned as Head in 1971 to devote himself to full-time teaching and writing. After 35 tears of service at UMass, he retired in 2001 and now occupies himself mainly by reading, writing, landscaping, and gardening.

During his career Aune has been a visiting professor at many different colleges and universities, including UMN, University of Michigan, UC Irvine, UC Riverside, and Dartmouth, Smith, Mt. Holyoke, and Amherst colleges. His honors include being a National Science Foundation Summer Fellow, a Guggenheim Fellow, a Fellow at the Center for Advanced Study in the Behavioral Sciences, a Fulbright Senior Lecturer in Australia, and a Director of a NEH Summer Seminar for College Teachers.

Aune has worked in the areas of epistemology, metaphysics (including philosophy of mind and philosophy of action), philosophy of language, and the history of ethics, but he considers himself a philosophical jack-of-most-trades and has done work in ancient and modern history of philosophy (Plato, Hume, Kant, and Peirce are special interests) as well as in ethics, esthetics, philosophy of science, and logic.

Apart from publishing more than ninety professional articles and reviews, Aune has contributed to such collections as Philosophy in America and Encyclopedia of Philosophy and written eight books: