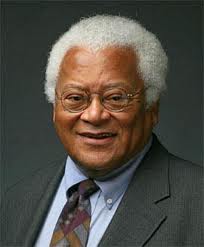 Where do we go from here: Chaos or Community?

James Lawson was born in Pennsylvania in 1928. His father and grandfather were Methodist ministers, and Lawson received his local preacher's license in 1947, the year he graduated from high school.

At his Methodist college in Ohio, he joined the Fellowship of Reconciliation (FOR), America's oldest pacifist organization. Through FOR, he was first exposed to the nonviolent teachings of Gandhi and fellow black minister Howard Thurman.

In 1951, Lawson was sentenced to three years in prison for refusing the Korean War draft. He was paroled after thirteen months, obtained his B.A. in 1952, and spent the next three years as a campus minister and teacher at Hislop College in Nagpur, India. While in India, Lawson eagerly read of the Montgomery Bus Boycott and the emerging nonviolent resistance movement back in the United States.

When he returned to the United States in 1956, he enrolled in Oberlin School of Theology in Ohio. By 1957, Lawson decided he could no longer sit on the sidelines. He enrolled at Vanderbilt Divinity School and opened an FOR field office in Nashville, where he began holding seminars to train volunteers in Gandhian tactics of nonviolent direct action. Drawing on the example of Christ's suffering, he taught growing numbers of black and white students how to organize sit-ins and any other form of action that would force America to confront the immorality of segregation. 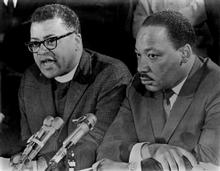 Nonviolent demonstrators encountered obstacles in the forms of violence from whites and skepticism from blacks. Lawson had to convince other blacks that nonviolence was "deeply rooted in the spirituality of Jesus [and] the prophetic stories of the Hebrew Bible." For Lawson, the civil rights protests were not just a political movement; "it was a moment in history when God saw fit to call America back from the depths of moral depravity and onto his path of righteousness."

James Lawson helped coordinate the Freedom Rides in 1961 and the Meredith March in 1966, and while working as a pastor at the Centenary Methodist Church in Memphis, played a major role in the sanitation workers strike of 1968. On the eve of his assassination, Martin Luther King called Lawson "the leading theorist and strategist of nonviolence in the world."

In 1974, Lawson moved to Los Angles to be the pastor of Holman Methodist Church. He hosted a weekly call-in show, "Lawson Live," where he discussed social and human rights issues affecting minority communities. He spoke out against racism, and challenged the cold war and U.S. military involvement throughout the world. Even after his retirement, Lawson was protesting with the Janitors for Justice in Los Angeles, and with gay and lesbian Methodists in Cleveland.