The following is inspired by Rabbi Arthur Waskow's book "Seasons of Our Joy"
(Bantam Books, 1982) and embellished by Larry Goldbaum, director of the Office of Religious and Spiritual Life at UMass Amherst. 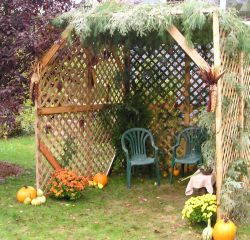 Every Fall, Jews around the world celebrate the festival of Sukkot by constructing a temporary dwelling called a sukkah.

Usually rendered in English as the Feast of Tabernacles, Sukkot derives from the Hebrew word sukkah, which means "hut" or—if you want to get fancy about it—"tabernacle"
(sukkot is merely the plural form of sukkah).

The week-long festival of Sukkot is really three celebrations in one:

(1) Sukkot is a harvest festival, joyously celebrating the bountiful gifts the earth has given us—and hopefully will continue to give us—during the growing season. This aspect of the festival derives from earlier pagan traditions and at times has included some rather bizarre rituals such as throwing lemons at, or pouring water on the king. The lemon-throwing is still practiced in a more subdued manner in the shaking of the etrog (a lemon-like fruit) and lulav (a palm frond and willow and myrtle branches tied together). The shaking of the lulav and etrog in the six directions is reminiscent of the Native American tradition, as is the customary use (in this country at least) of squash, maize and cornstalks to decorate the sukkah.

(2) Sukkot also commemorates a historical event: the forty years of wandering in the Sinai desert after the exodus from Egypt, until we entered the land of Canaan (a/k/a “the promised land”). The Israelites lived a nomadic existence in the desert, moving from place to place and living in temporary shelters whose main purpose was to provide shelter from the blistering sun. Viewed from this perspective, it’s easy to see why the sukkah is not built to withstand rain. In fact, Jewish law requires that the roof of the sukkah be at least one-third open to the sky. You have to be able to see the moon and stars through the roof.

(3) In addition to the historical and harvest/pagan aspects of the holiday, Sukkot also has a spiritual or metaphysical dimension: it is a reminder to us that as human beings, we are vulnerable to God/Nature; for the sukkah alone cannot shield us from the forces of Nature (“acts of God”). The sukkah is supposed to be fragile—fragile enough to be blown down by a strong wind (which actually happened to my family's sukkah several years ago!). Its fragility is a powerful reminder that humanity, indeed all life, depends on God/Nature. It helps to keep our egos in check, while reminding us that even the most powerful king is still human. Above all it demands that we have faith in a power greater than ourselves.