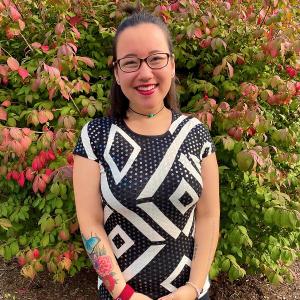 Jess Larsen is a junior transfer student at UMass Amherst pursuing a Bachelor of Arts in Piano Performance under the instruction of Gilles Vonsattel. She just released a new CD comprised of the complete first book of J.S. Bach’s Well-Tempered Clavier. Larsen released the CD to mark the ten-year anniversary of the first recording she made of Book One when she was only 10 years old. News Story =>

Who or what was your early inspiration to play music? Was there a particular formative experience you can point to from those early years?

Though I found joy in playing piano ever since I started at age 3, the first moment I fully comprehended the power of music was when I was 9, when I played the second movement of Mendelssohn's Piano Trio in D minor with my chamber group at New England Conservatory’s Preparatory School. I distinctly remember sight-reading through it and getting chills throughout the entire piece because of how profound and beautiful it was. Those harmonies and swells of passion made me feel emotions I couldn't even put names on, and to experience that kind of spiritual awakening alongside two other musicians and get to convey it in performance for an audience was incredibly special. I think that trio sparked my gradual realization that my foremost goal through music is to connect both with myself and with other people in a way that's deeply meaningful, healing, and empowering.

What insights have you gained into Bach's Well-Tempered Clavier in the 10 years between recordings?

I've been captivated by the preludes and fugues of the Well-Tempered Clavier ever since learning my first prelude - either C# major or D major - when I was 6. In 2010, when I first recorded Book 1, I was quite expressive with many of the pieces, but there were also some that I rushed to learn at the last minute and was mostly focused on just hitting the right notes (10 year-olds don't always have the best planning skills!). When I returned to the work last year, I wanted to ensure that I was getting as deep under the surface of the music as I could: uncovering the hidden gems of harmony, voice-leading, and texture that I'd overlooked before, and really trying to convey the unique character of each piece. It took some experimentation and stepping out of my comfort zone to consider possible ways a piece could be played, and then come up with an interpretation that I felt contributed to both a short-term and long-term story.

Any next projects on the horizon? Plans for after graduation?

My current main project is learning Beethoven's Hammerklavier Sonata! So far, I've learned the first and fourth movements; the latter is actually a massive fugue and one of the hardest pieces I've ever played. The whole sonata is monumental, both in its innate richness, splendor, and in the way it completely overhauled the typical expectations of a sonata and introduced entire new dimensions to what the form could encompass. I'm hoping to give a performance here at Bezanson in the spring, so the Beethoven will definitely be on the program!

As for long term goals, there are still so many potential paths I could see myself taking; but after having just transferred to UMass, I feel certain that I want that path to involve music and piano. My current dreams are to teach my own piano studio and tour the world in a chamber group, and I've also taken a recent interest in conducting due to the incredible class I'm taking with Professor Matthew Westgate. The best part about my time at UMass so far has been how drastically my classes have already expanded my horizons and inspired a deep curiosity in topics I previously knew nothing about. I am extraordinarily lucky to be here and excited to find out what the future brings!

Have you had experiences in other exploring other styles of music? What’s on your current playlist?

Though I've always played pretty much exclusively classical music, I've written both vocal and electronic pop/alternative music, a pursuit I became highly invested in a couple of years ago. I also listen to mainly pop, for which people call me "basic," but that's just my excuse to turn the music up louder! I've probably listened to Ariana Grande's k bye for now album hundreds of times; she and Demi Lovato are my favorite artists. If I had to pick my current 4 favorite songs, I'd pick "Jason's Song (Gave It Away)" by Ariana, "The Art Of Starting Over" by Demi, "Baby Girl" by Chloe x Halle, and "Salute" by Little Mix.