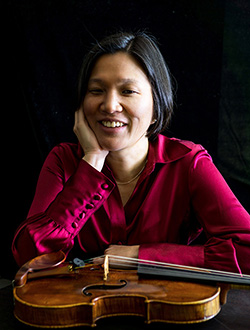 Earlier this month, UMass Professor of Violin Elizabeth Chang released her new CD, Transformations, on Albany Records. The release features works by Leon Kirchner (1919–2009), Roger Sessions (1896–1985), and Arnold Schoenberg (1874–1951), and is rooted in the cross-generational connections between Chang and these composers.  The CD was produced, engineered and mastered by Adam Abeshouse, a past GRAMMY-winner of Classical Producer of the Year, with David Schneider, Andrew W. Mellon Professor of Music at Amherst College, providing the liner notes.

While at Harvard, Chang studied under Kirchner, who in turn studied with both Sessions and Schoenberg, two of the most influential composers of the twentieth century. According to Chang, “Both Sessions and Schoenberg were pioneers in seeking a new compositional language in the post-tonal world while being deeply rooted in the Germanic tradition.” She describes Kirchner as having had a “profound artistic and pedagogical influence” on her, and sees his music as reflecting “both the thorny complexity of modernism while palpably reaching for the sensuality of the musical language of a previous era.” 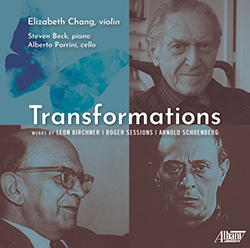 Transformations includes Kirchner’s Duo No. 2 for Violin and Piano (2002), with Chang performing alongside pianist Steven Beck. The piece was written as a tribute to violinist Felix Galimir, whom the composer befriended at the Marlboro Music Festival.

Also included on the new CD are two works by Sessions.  His Sonata for Violin (1953) was commissioned as a tribute to violinist Robert Arthur Gross, who studied composition with both Sessions and Schoenberg. The piece, which Sessions called “difficult as hell,” was composed using his own adaptation of Schoenberg’s 12-tone method.

Chang is joined by cellist Alberto Parrini on Sessions’ Duo for Violin and Cello (1978), which the composer dedicated to his son, cellist John Sessions, and his daughter-in-law, violinist Giovina Sessions. Duo was the last piece of chamber music Sessions wrote before his death at age 88. Schoenberg’s final work of chamber music, Phantasy for Violin with Piano Accompaniment, Op. 47 (1949) is the CD’s final track, with Chang once again joined by Beck on piano. 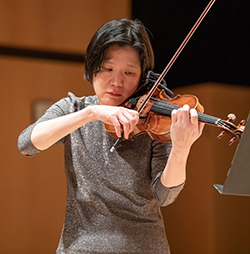 As a performer, Chang has worked with a number of composers on new works for violin, including Salvatore Macchia, Eric Sawyer, and Lewis Spratlan, and has appeared as soloist and chamber musician both in this country and in overseas. She has toured and recorded with the Orchestra of St. Luke's and the Orpheus Chamber Orchestra.

At UMass, Chang coordinates the string studios for the Department of Music and Dance, and also co-founded the department’s biennial Bach Festival and Symposium and the Five College New Music Festival. She serves on the faculties of the Pre-College Division of the Juilliard School, the Green Mountain Chamber Music Festival and the Brancaleoni International Music Festival. Chang is Artistic Director and co-founder of the Lighthouse Chamber Players (Cape Cod) as well as co-founder and co-organizer of Musique de Chambre en Val Lamartinien (Burgundy, France).