Amherst (MA) - In January, students and alumni of the UMass Amherst Music & Dance Department received major recognition from the Jazz Education Network, the nation's most prestigious jazz education organization, at their 2019 Conference in Reno, Nevada. 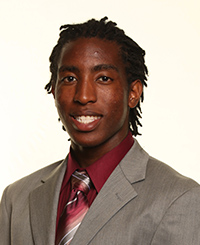 Rashaad Greene '20MM was selected to receive the David Baker Collegiate Scholarship, presented annually to an outstanding jazz student who excels in a college/university music program by demonstrating talent, spirit, and commitment to the field of jazz studies. The award was established in 2010 to honor the contributions of NEA Jazz Master/Educator David Baker.

Greene is a percussionist/drummer currently pursuing a Master of Music Degree after having earned his Bachelor’s from Vanderbilt University. Classically trained since the age of 11, Greene distinguished himself as one of the finest young musicians in Cobb County, Georgia through his participation in National Honor Band/Orchestra of America, the Atlanta Symphony Youth Orchestra, and Georgia’s All State Band/Orchestra, where he was named principal percussionist for four consecutive years. At UMass Amherst, he is studying with jazz instructors Tom Giampietro, Fumi Tomita, Cathy Jensen-Hole, and Jeffrey Holmes.

Greene has worked diligently to bring jazz music to a wider audience by performing at retirement homes, providing free private instruction for low-income students, and volunteering and performing at the Northampton Jazz Workshop. He hopes to utilize his award to develop a private instruction studio to continue to share his passion for jazz music and percussion chamber music in particular. 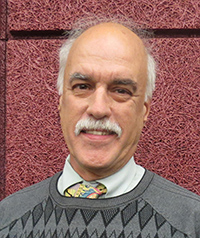 Another major award at the 2019 JEN Conference went to Thomas Lizotte ‘86 ‘90MM, who received the John LaPorta Jazz Educator of the Year Award. Co-sponsored by the Berklee College of Music, the award is presented to the jazz educator who represents the highest standards of teaching and whose results in the classroom have brought distinction to an institution and to students. The award is named for John Laporta, a distinguished professor of jazz at Berklee for over 3 decades.

Lizotte has been in public education for the past 30 years, and currently teaches at Cape Elizabeth High School in Maine. Previously, he taught in high schools in Massachusetts, Connecticut, and Florida, and is a member of three teaching halls of fame – Massachusetts Drum Corp, Boston Crusaders, and Main Music Educators. In accepting his award, Lizotte pointed to UMass music professor emeritus David Sporny as a having been a major influence on his career. 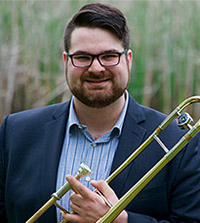 Also at the Conference, a composition by graduate student Brian Martin '19MM was selected for inclusion in the Young Composer Showcase. Martin’s “Lookin’ Forward,” was one of only six selected from a highly-competitive national field; other winning entries were submitted by jazz students at Berklee College of Music, University of Miami, University of Michigan, Indiana University, and University of Northern Colorado. Martin and the other five composers had the honor of hearing their winning entries by the U.S. Army Jazz Ambassadors during the final full day of the conference.