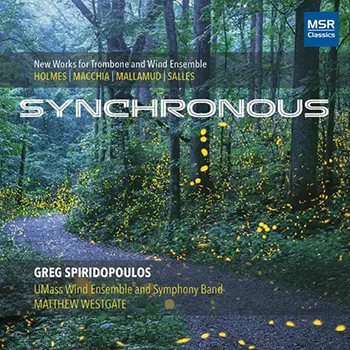 Spiridopoulos and Westgate originally planned to record a CD of standard trombone solo works with Wind Ensemble through funds from a Faculty Research/Healy Endowment Grant through the Office of Research Development. When their plan was scrapped due to the pandemic, Director of Jazz and African American Music Studies Jeffrey Holmes approached Spiridopoulos with an idea for a new work for trombone and ensemble. That conversation led Spiridopoulos and Westgate to reimagine the project around recordings of all new works, rather than existing ones.

Spiridopoulos then approached two other UMass colleagues—Salvatore Macchia and Felipe Salles—about creating new works for the project. Since these composers were based locally, the decision was made to perform the works live during the school year and then record them for the CD project.

In the fall of 2021, two of the new works were performed live and then recorded in session.   Spiridopoulos and the Wind Ensemble performed Macchia’s Lacrima, a trombone concerto in the manner of a requiem mass to reflect the overwhelming sense of loss caused by the pandemic. In contrast, David Mallamud’s Sir Dance-lot’s Retro Workout Mix, the only work created by a non-UMass-based composer for the project, is a freewheeling, giddy, and outrageous musical adventure for both the soloist and the UMass Symphony Band. The other two new works were premiered and recorded the following spring: Holmes’ Concerto for Trombone and Wind Ensemble: A Nautical Trilogy, which the composer describes as “depicting human interaction with the sea and its inhabitants who insist on collaboration,” and Salles’ Asynchronous, Synchronously, a sonic interpretation of the gaps and glitches that occurred while attempting to make music remotely during the pandemic.

This final CD, which was edited and mastered during the summer of 2022, represents the latest recording project involving the UMass Wind Studies program under Westgate’s leadership. In 2019, the Wind Ensemble debuted three newly-commissioned pieces for winds on a CD entitled Quicksilver also on MSR Classics. For his part, Spiridopoulos has a lengthy resume as a recording artist both as a solo artist and through his work as Principal Trombone with the Albany Symphony.

In discussing this newest project, Westgate commented, “This project turned into a huge, collaborative effort for our department. Our faculty composers wrote complicated, personal, thoughtful pieces, Greg is a world-class soloist, and the players in the Wind Ensemble and Symphony Band worked incredibly hard in the concerts and recording sessions to make the composers’ visions a reality. Getting to create something like this coming out of the pandemic was a true gift for all of us.”