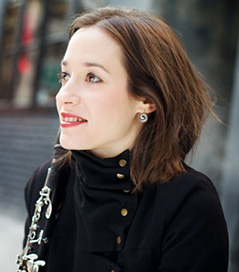 Praised as “…extraordinary...” and “…a formidable clarinetist...” by the New York Times, Ms. de Guise-Langlois has appeared as soloist and chamber musician on major concert stages internationally. She has performed as soloist with the Houston Symphony, Ensemble Connect, the Burlington Chamber Orchestra, and the Guanajuato (Mexico) Symphony Orchestra; at Festival Mozaic, Music@Menlo and at the Banff Center for the Arts. She was awarded first prize in the Houston Symphony Ima Hogg competition, the Yale University Woolsey Hall Competition, the McGill University Classical Concerto Competition, and the Canadian Music Competition.

A native of Montreal, Ms. de Guise-Langlois earned degrees from McGill University and the Yale School of Music. Previously, she served on the faculty at Kean and Montclair Universities in New Jersey.